What Are Grid Slots?

The world of slots is constantly changing. Every so often, a new idea comes along which charms the entire industry. The best example of this are the Megaways slots that have taken over the market in recent years. However, they are not the only innovation to appear in this space. Developers are creative and always look for new ways to draw more players to their titles.

As such, constantly experimenting with the core of what makes casino games tick is nothing new. Cluster Pays, the avalanche special feature and larger reels are all things independently created. Exactly who was the first person to combine these into the first grid slot is unknown. In this article, we will explore the gameplay behind grid slots as well as which titles are the best in this category.

You may not notice a huge difference at first glance. Grid slots make no effort to change their layout drastically. However, two things are very common in this type of game. First is the fact they usually have more than five reels. The second thing we noticed is that the number of reels and rows are usually similar or same in numbers. That means, instead of having a 5×3 layout, we have a 5×5 or an 8×8 playing field.

One more thing that is very frequent among grid slots is the fact they use cluster pays mechanics. This system first saw the light of day with NetEnt’s Aloha! Cluster Pays game. In that release, wins were awarded by getting four matching symbols in adjacent positions. Rather than following paylines, winning combinations pay as long as the icons are connected vertically or horizontally.

Big playing fields and the unique way to grant wins go really well with certain special features. Stacked symbols on the reels are often a great help, as are cascading reels. Both of these bonuses can create fantastic winning combinations when playing this type of game. For this reason, these two special features are some of the most widespread when playing grid slots.

Choosing the best games to play is always a tough call. That said, there are quite a few titles that we feel are super important to mention.

One of these games is Gemix, which launched in December 2014 and quickly gained a stable following of players. It is a 7×7 grid, where you need at least five matching icons to form a win. Present special features the Avalanche and four crystal charge bonuses. Charges can also super charge, increasing all wins by 3x. Finally, you can access three different worlds, each with its own special feature. The top prize is 6025.5x your stake. 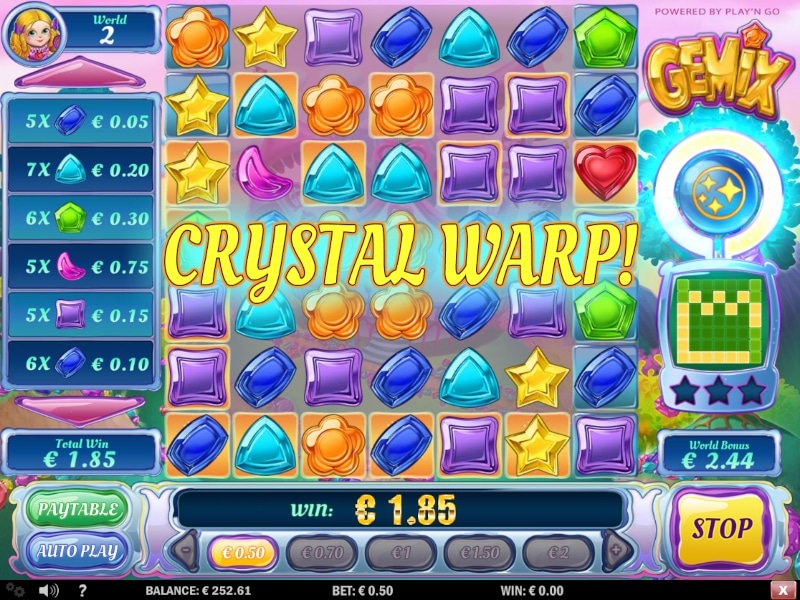 Read more about grid slots and their most popular representatives.

If that is not quite your cup of tea, why not try Sweet Bonanza? It launched in June 2019, bringing with it modern graphics and high volatility! It is played on a smaller, six-reel five-row grid, where you need at least eight matching symbols to win. The cascading reels mechanic is active in this grid slot, as is a free spins bonus. Find four or more Scatters to get ten free spins. With each free spin, there is a chance candy bombs can appear, boosting your multiplier up to 100x. Thanks to this special feature, players can enjoy a maximum win of 21,100x your total bet.

For a more unorthodox experience, you can also check out Star Clusters: Megaclusters by Big Time Gaming. It released in June 2020 and fundamentally alters the core of how cluster pays work in grid slots. We discussed Megacluster slots already, so this game may look familiar to loyal readers! Things start slow with 8 symbols on the reel and can increase up to 256 during its special features. This is what allows players to win the incredible 23960x your total stake jackpot when playing this release.

We could keep going, but there is no need to do so. The basic idea behind grid slots is quite simple. You will know in the first two hundred spins if they are something you like or not. We at Indiancasinoclub.in love most of what the software providers have created. If you like more frequent wins that still offer fantastic winning potential, you will have a blast playing this game type.