One of the major hurdles new players face coming into blackjack is learning the strategy. One of the biggest advantages this card game offers is that we know the optimal move no matter what. Other releases can come close to this, but none of them are quite on the same level. This allows blackjack tables to offer a house edge below one percent when all the right rules are in play.

Developers have tried multiple times to get around this flaw. They added instructions in the games themselves and tried to streamline the process. Certain live casino releases will even play the game for you following an optimal blackjack strategy! These were valiant efforts, but they pale in comparison to Playtech’s latest table. The same speed blackjack we know and love with a brand new twist!

The game follows classic European blackjack rules while adding a brand new Majority Rules mode. The table has only one seat, which is shared by all players. Everyone sees the same hand. As always, the goal is to beat the dealer. However, the way you go about doing this has to be agreed on by the majority!

Using Majority Rules, you cannot make an independent decision for your existing hand. Instead, the game keeps track of what decision most of the table chose to go for. Whether that decision is hitting, standing, doubling or splitting! The winning move must have more than half of the players choose that option.

Experienced punters probably will not like it. After all, it means you are hoping that other people will play the same as you would. The table making a decision that you do not agree with can be frustrating. That said, we like the fact we at least have a vote to decide with. NetEnt’s Perfect Blackjack Live did not allow even that! In that game, all decisions were made following the optimal blackjack strategy.

Of course, this is an interesting concept when you have many players at once. That said what if you are occupying a table only played by a few people? After all, it would not be a great idea if you could hijack a table and make the wrong choices with two or three friends. For this reason, Majority Rules only kicks in after a certain number of punters are present on the Speed Blackjack table. 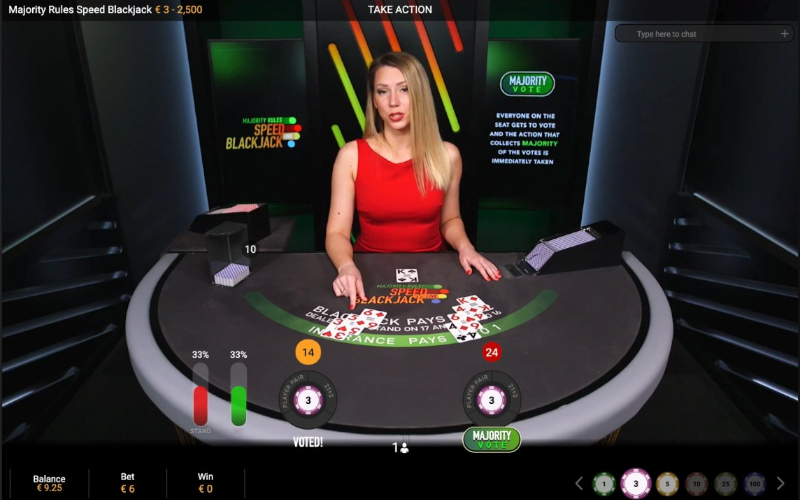 When there are not enough players, the rounds are kept fast-paced by adopting the same system used in NetEnt’s release. Rather than waiting for decisions, the dealers just immediately play the hand following the basic blackjack strategy. As a result, new players are still able to see the game played and learn the rules. Meanwhile, punters that care for speedy rounds get the benefit of quick resolution.

No matter which mode you play, you will come across bets that require extra funds be put into the game. You can choose to accept Doubles and Splits automatically when they are played. If you do not do this, the game will keep asking for your permission every time. It is a slight hassle, but nothing terribly overwhelming or difficult.

This is not the first time the developer added in new mechanics to blackjack. Their innovative ideas also gave us Quantum Blackjack, which remains incredibly popular to this day! Adding multipliers and the option to win big to blackjack addresses one of the major concerns punters had with this game for the longest time. Playing optimally did not allow you to win big.

Additional games by the same developer continue to push the industry forward. Playtech never rests, which helps keep them on top of the live casino space. While Majority Rules Speed Blackjack is not on the same level, it still shows a desire to make something different. Each new title brings them closer to their status of live casino kings, alongside Evolution Gaming and NetEnt Live.

Perfect Blackjack was designed for completely new players. Majority Rules Speed Blackjack is built for two types of punters. Those a general understanding of blackjack, but lack experience, and experienced players who want to benefit from faster rounds. Put these two groups together, and you see how voting swings towards playing optimally! It has the Indian Casino Club seal of approval!