Some software providers are content creating new slots and pleasing their existing audience. Then you have developers like Yggdrasil, who are willing to take the extra responsibility of publishing titles, too! Programs like YG Master and the GATI system allows new software providers to collaborate with Yggdrasil. Assuming they maintain a certain level of quality, the developer will feature their titles!

As a result, we can now get more titles from this software provider than ever before! Just for October, they have three new slots prepared for us to try out. First, we will grab some drinks in Rock the Cash Bar. Then, we will get a good look at a volcano in Hyper Burst.  Finally, we will travel to the underworld to see the realm of Hades! Join us for a sneak preview of these three games.

This was a release many of us wanted to check out, as it was developed using Yggdrasil’s GATI system. Rock the Cash Bar is played on a five-reel board with 243 ways to win. Available special features include three free spins levels, win multipliers, re-spins and expanding reels. All of these bonuses are interconnected, which was something we quite liked.

Land a Scatter on reel one and ticket symbols on reels two to five to win free spins. The ticket icons determine the number of free spins you get. You start at Club Night, which is the lowest level. By finding the upgrade symbol, you can upgrade to Invite free spins, and then VIP free spins. The increase in levels changes the minimum and maximum free spins multiplier. During this bonus, the playing field can increase to a 5×7 board.

Yggdrasil offers us a low variance in this slot and an RTP of 96.06%. The top prize you can take home is worth 6589x your total stake, which is awesome given the volatility. You can bet between ₹10 and ₹10,000 per spin.

Next, we venture into the deep jungle. In a land far from our own, lies a seemingly peaceful volcano. Do not let the clam exterior fool you: it is just about ready to blow! Hyper Burst is played on a six-reel board with twenty-five fixed paylines. Available bonuses include hyper re-spins and win multipliers. Both very simple bonuses, with awesome potential when they are combined.

Every winning spin will trigger a re-spin mode. The volcano will explode, and some lava will fill the reels, making colossal icons appear on that joint reel. The colossal symbols start with 2×2, then increase to 3×3 and 4×4 afterwards. Once they reach the maximum size, Hyper Mode begins! It starts with a 2x multiplier, and the multiplier increases by one for each consecutive win, up to 10x. 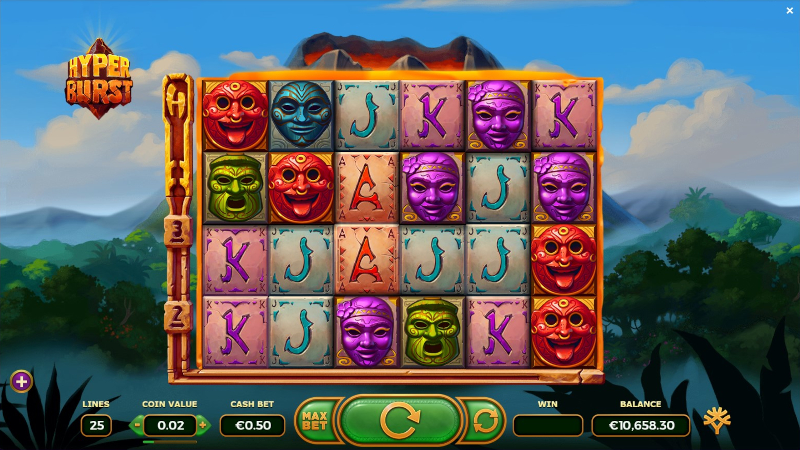 A busy October for Yggdrasil Gaming as three new slots are released.

For the last on Yggdrasil’s great October games, our journey takes us to the realm of Greek mythology. There, we have a chance of meeting Hades in his very own release! This slot has six-reels in total and is played with fifty fixed paylines. Available bonuses include Gigablox, Wild Hunt, free spins and win multipliers. Nothing too fancy, but all of these special features together are very promising!

Gigablox can appear at any time and can reach a maximum size of a 6×6 icon. Occasionally, Hades will fight a monster symbol. If he defeats it, all monster blocks of that type turn Wild temporarily. Hades will always pick a fight with monsters during free spins. To win free spins, you need at least five Scatters. Each Scatter you land grants you one free spin. Each successful fight during free spins increases the counter. Collect enough points and you get a higher multiplier, reaching up to 10x!

No matter which of these fantastic titles you choose, we at Indian Casino Club have no doubt you will have a blast playing them.