The rise of mobile casinos led to the creation of many new software providers. These developers used a rapidly growing market to climb their way to the top with awesome special features and graphics. Yggdrasil is one of these software providers! Their rise has been nothing short of spectacular. They started with making slots and then moved into table games and other innovative releases.

A continued drive to succeed has led to Yggdrasil become a familiar name for many online casino players. That reputation is something the developer leveraged to create its own publishing wing called YG Masters. The software provider has been hard at work expanding this program in the last couple of months. Shall we look at what they have accomplished?

What is YG Masters, Exactly?

In short, it is Yggdrasil’s self-curated list of games that uses their own technology. New studios are able to use the tools the team spent years perfecting to craft their own titles. On top of that, releases developed using the software provider’s Game Adaptation Tools and Interface (GATI) can be easily distributed.

Casinos that sign on with YG Masters benefit from the vast library of slots within the library. Developers that are part of the program can use Yggdrasil’s marketing tools and can distribute their titles with ease. It is a winning situation for everyone involved.

Beginning in October, Yggdrasil announced it was adding two studios to its YG Masters programme. The first one was Jelly, a mobile-first software provider. The two teams have worked together in the past, and the quality of Jelly’s games won them the Masters spots!

Another awesome addition is ReelPlay, a developer from Sydney, Australia. This developer joining YG Masters brings several interesting titles to Yggdrasil’s offering, like Giza Infinity Reels. Both studios will be using Yggdrasil’s GATI technology to create their own game engines. This will allow them to create fun releases more quickly.

Yggdrasil’s offering is clearly doing well, as they are attracting some big-name casinos to join, too. Betsson recently announced it would join YG Masters. That means every smaller software provider that is part of the program has access to that casino’s massive audience. Furthermore, thanks to GATI integration, all the distribution is handled by Yggdrasil themselves.

We also get to see just how versatile GATI truly is in Victoria Wild. Created by TrueLab Games, another YG Masters partner, this is the first slot to be fully made in GATI.

From the get-go, you can see the developers tried hard. The visuals are great, taking us through a large, desert area. Animations are top-notch, both on the playing field and in the background image. Speaking of the background, did we mention that it changes? As you activate special features, you will find yourself in a large temple or relaxing in an oasis. In short, the graphics are top-notch! 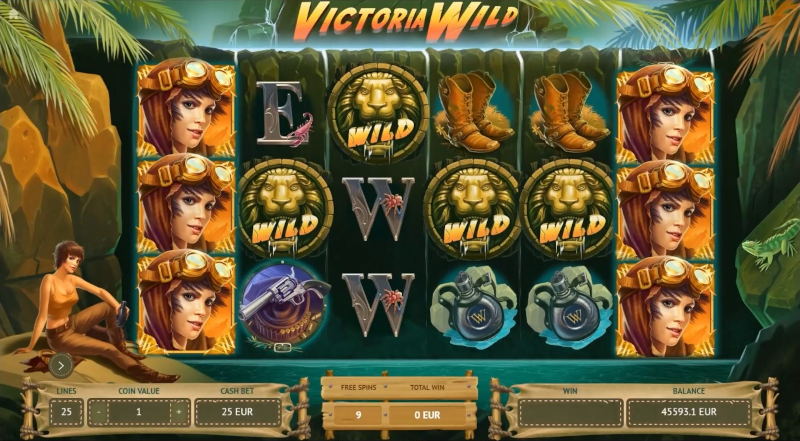 The title is brimming with fun special features. To start with, we have randomly activated Sandstorms. During this bonus, between two to six Wilds are added to the playing field. If two tornado Wilds collide, the sticky Tornado re-spins are activated. While the re-spins are being played, all Wilds are held in place. If a new Wild appears, the re-spin continues, but if no new Wilds land, the bonus ends.

Get three, four or five Scatters to win eight, ten or eleven free spins, respectively. During free spins, you play on a larger board. If you collect seven lamp Wilds, you get to spin the Wheel of Desire at the end of the special feature. The wheel can grant coin prizes or a multiplier increase of your current free spin wins. You can also draw a skull, which ends the bonus.

Find twenty-five Oasis symbols to progress through the map and activate ten Oasis free spins. During this special feature, waterfall Wilds appear on reels two, three, four and five, and can expand to cover the entire reel.

If this is the standard that future GATI games will have? We cannot wait to see more GATI additions to the world of Online Casino, Online Gambling & Variations. Seeing as more casinos and developers join the YG Masters program, it is only a matter of time. Hats off to the team at Yggdrasil. Their expertise and knowledge have opened the way for hundreds of amazing slots!