What are Yggdrasil Splitz Slots?

Video slots have embraced the freedom offered by the internet wholeheartedly. Many casino games still remain restricted by their set rules and are only now starting to experiment. Slots have been doing so for years, and innovation has not slowed down in the slightest. If anything, new concepts are consistently rewarded, as the market embraces megaways, cluster pays and other additions.

In the sea of releases competing for your attention, only the best and most interesting stand out. Which is why Yggdrasil decided to throw its hat into the ring and create a brand new mechanic of its own. Join us as we look into the latest mechanic the developer introduced to slots, called Splitz.

As its name implies, this mechanic is able to split individual symbols. The exact details will vary depending on the game. However, split icons count as multiple symbols, even if they are only occupying a single reel. The result of this can be quite impressive if you get lucky. You will be able to form winning combinations far greater than what the playing field would usually allow.

As Splitz affects one or more reels, they increase the number of active paylines. In that aspect, it reminds us quite a bit of the megaways mechanic. Each spin offers a different number of ways to win, although they achieve it in different ways. Megaways adds more positions to the reel, while Splitz crams more icons into the currently available space.

The best way to get the feel for a new mechanic is to try a game that takes advantage of it. Yggdrasil was happy to provide us with a very fun example in their latest title, called Syncronite. It is gorgeous, depicting its simple designs in an interesting Art Deco style. Between that and the fantastic soundtrack, players will no doubt have a blast playing the latest Yggdrasil masterpiece.

It is definitely a unique experience, especially compared to Yggdrasil’s October launches. It owes that to the active Splitz mechanic and the synced reels that also play an important part in Syncronite. You are guaranteed to get at least two adjacent reels synchronised on each spin. However, it is possible for more reels to be added and synchronised, with a maximum of all six being affected! 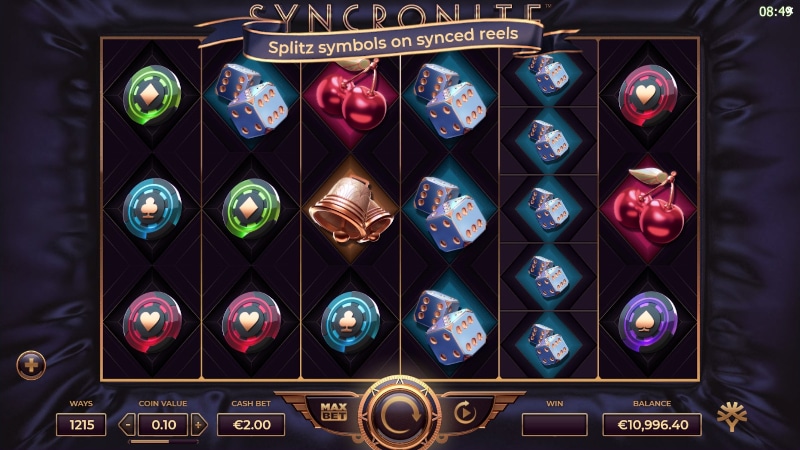 Learn more about the new Splitz feature developed by Yggdrasil.

This would open the way for huge wins, but the Splitz special feature enhances the bonus further. Splitz can split symbols into eight identical icons. All positions affected by Splitz will display the same symbol, giving you improved odds of winning. Keep in mind that icons affected by this bonus can only appear on synchronised reels. The more of them you can activate in a single round, the greater your chances of winning will be!

Mind you, this is no low variance game with a small jackpot and forgiving gameplay. Syncronite is highly volatile, and comes with an incredible maximum win of 64,000x! The RTP is also above average, sitting at 96%. The release is played on a six-reel board, with 729 ways to win. Of course, thanks to the Splitz mechanic, that number can be increased to a maximum of 21,168 ways to win.

While Syncronite is the latest title to launch with this mechanic, it is not the first. Two very interesting games put their own spin on Splitz before Syncronite launched. These two releases are Neon Rush and Temple Stacks. Here is a sneak preview for both, courtesy of the Indiancasinoclub.in team!

Neon Rush is an incredibly stylish game set in a cyberpunk future. Neon lights and tall buildings stretch as far as the eye can see. Here, Splitz is handled using a separate Splitz symbol. It functions as a mystery icon, as it is eventually cut open to reveal another symbol. The revealed icon will reveal between one to five symbols in a single position. It is also the sole way to win one of six fixed jackpots!

Temple Stacks takes us back to the era of ancient American civilisations. The scenery is incredible, but what we came here for is the Splitz mechanic! Here, a mystery reel has a chance of covering one or more reels. Each mystery reel can then be split into twelve identical icons. This greatly increases your chances of winning and plays well with other special features Temple Stacks offers.