Every new slot by Quickspin promises to be a crazy good time. The developer has a knack for making interesting and fun games. Their latest title has us venturing the jungle to hang out with the monkeys. While we are there, we might also run into a mysterious golden idol with magical powers! Stick around long enough to figure out the secret! Doing so will let you take home a sizeable jackpot.

We adored the background image in Loco the Monkey. Lush jungles are nothing new, but the developer has done a fantastic job drawing and animating everything. Smoke rises in the air. Leaves bob back and worth simulating a light gust of wind. The forest is drawn to stretch far beyond what we can see. There are plenty of little details to admire! However, your focus will be locked on the board itself.

All the action unfolds on a standard set of reels. Playing card royals are low-value symbols. The developers put some effort into stylising them, helping them fit the theme. Medium win icons include several exotic fruits. Different shapes and colours make them easy to distinguish between each one. The monkey is a Wild symbol, while a golden idol is the Scatter.

This release has a fun re-spin round. Maybe not good enough to qualify for our top 5 slots with re-spins, but it comes close. Landing four or more Wilds on a single spin grants the More Monkeys! re-spin. Triggering Wilds stay in position, while the slot spins reels two, three, four and five again. Any Wilds that land during the re-spin will also be frozen in place. The bonus continues until no new Wilds land on the board.

Land three golden monkey Scatters to win ten free spins. You get a brief introduction where we see a monkey pick up the idol. His eyes begin to glow, which is reflected in the changed Wild design! The adjustment is not just visual. Wilds become sticky during free spins. If another Wild lands on top of a frozen Wild, it increases its multiplier by one. Locked Wilds can have a maximum multiplier of 3x. 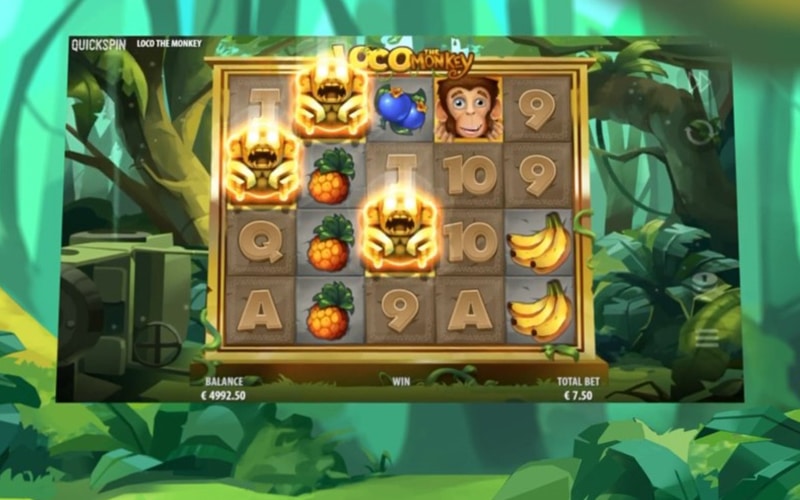 Quickspin’s latest game gives us a five-reel, four-row playing field. There are fifty active paylines, which cannot be turned on or off. The maximum cash prize you can win in Loco the Monkey is 6829x your total stake.

The impressive top prize is not easy to win, however. Quickspin has made this slot highly volatile, which makes scoring big prizes difficult. The RTP for this release is 96.15%, which is slightly above average.

Many developers do their best to reinvent the wheel. Big Time Gaming’s Megaquads slots are the perfect example of this. In contrast, Quickspin is happy to keep things simple. If you are a fan of slots, you have probably encountered all of these bonuses already. That does not make them any less fun, however. In fact, its impressive top prize will no doubt inspire a few punters to get loco themselves.