How many times have we been one symbol away from a win? It is incredibly frustrating when it happens, and it leaves you wanting to re-do the whole thing. The first re-spins did not really target that frustration. Instead, they primarily focused on being an alternative to a free spins round.

Of course, that was a long time ago. Today, a lot of slots incorporate the re-spin special feature into their gameplay. Developer innovation has done a great deal to make this bonus one of the most exciting bonuses you can win! As such, we will be taking a look at some of the best slots with the re-spin feature available.

Playtech’s entry needs very little introduction. Age of the Gods is one of the most popular slot series out there, owing to its amazing progressive jackpot network! At any given moment, you have a chance at winning a prize pool accumulated across 15+ different titles.

Its re-spin bonus is tied to a ship Wild, which covers the entire reel when it lands. The Wild moves one position to the left every turn, while the rest of the reels re-spin. Each time the Wild moves, the multiplier increases by one! The last re-spin is played when the Wild disappears from the reels in its entirety.

We do not think it would be fair to have an article that covers best re-spin slots without mentioning Starburst. While the special feature was popular before, NetEnt’s release really popularised it! It proved that this was a bonus capable of carrying an entire game on its own. No need for free spins or other special features here!

Reels two, three and four are what you want to look for. When a Wild lands on them, it will expand and cover the entire reel while granting a single re-spin. If you then get another Wild, you receive another re-spin. Using this system, you can get up to three re-spins and a guaranteed win if you get three Wilds in the middle three positions.

If you were ever one reel away from a mouth-watering win, Microgaming has the solution! Book of Oz takes quite an inspiration from Novomatic’s Book of Ra, like so many other software providers. The team adds something unique to the game, however. Here, we receive a unique form of re-spin. 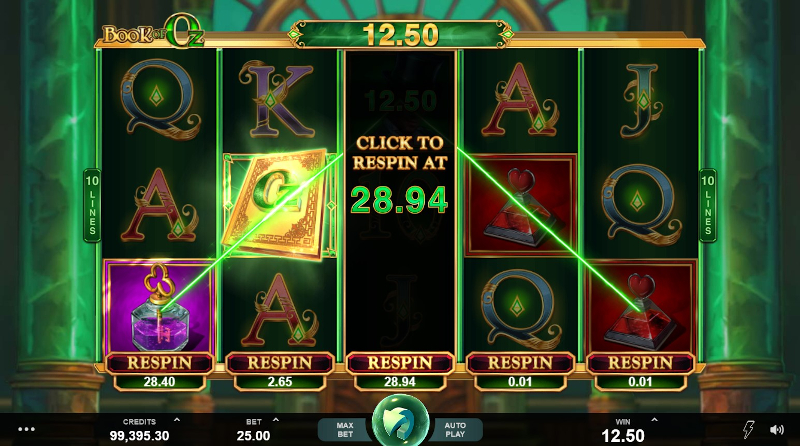 Are you a fan of respins? Check out our list of top slot games with the respin feature.

When you spin the reels, you are able to re-spin each individual reel separately. Each reel re-spin costs a certain amount. The bigger its chances of creating a winning combination, the higher the cost! You have to carefully balance how much you could win compared to how much re-spinning will cost you.

Fans of three-reel slots should check out Fire Joker by Play’n Go. While its graphics are basic, it has a thrilling special feature and a decent winning potential. It is fast-paced, enjoyable, and offers great medium variance gameplay. If you enjoy classic slots and their simple gameplay, this game will be right up your alley.

As for the re-spin, the special feature is as simple as the gameplay of this release! It acts as a second chance to win if you have at least two reels with the same symbols. It does not always create a winning combination, as you might expect. Still, it feels amazing to watch the re-spin transform a certain loss into a win when it does happen!

The last entry on our list is another NetEnt title and an Indian Casino Club favourite. Complex, low variance games can be difficult to find. Usually, low volatility means the software provider throws together a simple release. Every so often, we receive something actually exciting in this space, and that is exactly what Jumanji offers!

It has eight special features, two of which feature re-spins in some fashion. First is the randomly activated Sticky Vines bonus. All symbols that were part of a win are locked in place with vines, as well as any Wilds. A re-spin is then played, allowing you to expand the win with more Wilds and icons.