If you are a fan of grid slots, then you have probably heard of Reactoonz. Many of us have played this title extensively over the years. Thanks to its awesome gameplay design and fun special features, it won the hearts of players everywhere. The fact you could win a sizeable 4750x your total stake just made it even better!

The sizeable audience this game has garnered has not gone unnoticed by Play’n GO. Their developers have been hard at work behind the scenes to make a worthy sequel, and they have done a great job. Some things have been kept the same, with a few additions to keep things interesting. No sequel wants to make things too different to avoid alienating the audience, after all.

Players who enjoyed the original will immediately see that Reactoonz 2 keeps to the same design idea. It is played on a large 7×7 board, where wins are granted using cluster pays instead of paylines. Cascading reels have also carried over into the sequel. That means winning combinations will disappear, leaving room for existing symbols to take their place. Meanwhile, brand new icons fall down and fill the empty spots.

Speaking of symbols, many of the aliens from the original Reactoonz make a return here. The sequel also adds Energoonz, which had their own title, too. Now, these two alien species are working together to create something truly fun. Fans of both titles will be happy to see the characters return in a new, even more lucrative setting!

One of the smaller one-eyed aliens is selected as the fluctuating icon at the start of each round randomly. If you land a win with fluctuating symbols, they create an electric Wild on any spot where an icon was removed. The Fluctometer holds up to 11 charges and can create up to three electric Wilds when fully filled. The meter is always active and can be recharged during the round, up until Gargantoon disables it.

As if one meter is not enough, Play’n GO give us another one to fool around with! All non-Wild symbols removed by electric Wilds charge the Quantumeter. Charging this meter enough will first release the Energoon and then Gargantoon. If Gargantoon breaks free, the meter is disabled. The meter has four charge levels. Collect 55, 85, 110 and 135 charges for levels one, two, three and four, respectively.

However, if the Quantumeter does not reach reel three, Energoon Wilds are unleashed on the grid. Level one creates four 1×1 Energoon Wilds. Meanwhile, level two unleashes a single 2×2 Energood Wild. In both cases, the position of these Wilds is randomly determined. 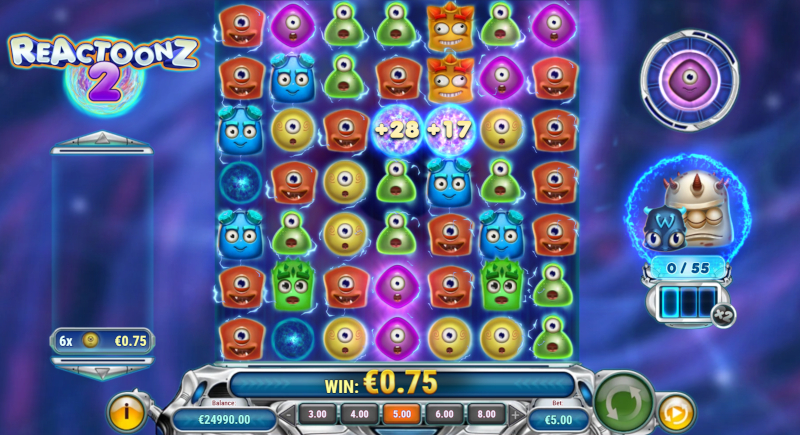 Play’n GO rolls out a sequel to the popular Reactoonz slot.

Just like its predecessor, this slot offers high volatility gameplay and a shot at winning big. In fact, the winning potential is greater than ever, with a top prize of 5083x your total stake! This is a fantastic payout, especially when you consider the 96.20% return to player this slot offers. It will not be a game for everyone, but it does have some awesome elements if you give it a chance.

Following up on a release as popular as Reactoonz is tough. However, Reactoonz 2 manages to pull it off without breaking a sweat. Play’n GO has created a fantastic title. We have had the pleasure of playing many slots, but nothing in the world of Online Casino, Online Gambling & Variations ever quite scratched that Reactoonz itch. Nothing but the sequel, which we wholeheartedly recommend playing.