Not many games from India make it on a global scale. That is why so many of us treasure titles like Andar Bahar. They show a bit of India to players who otherwise would not have an opportunity to try them. Among these releases, none have made as big of a splash as Teen Patti has! With the rise of live casino games, it has seen global interesting once software providers adapted it.

If you have never come across this game before, this article is for you! It will teach you all the important aspects of playing Teen Patti, both online and offline. Once you finish reading our guide, you will be ready to join any table and have some fun! Do not worry about learning complex strategies, either. This game is super intuitive once you get the hang of it!

Start of the Round

Teen Patti is usually played with two to ten people on a single table. It is played with a single 52-card deck. If playing against other punters, you will all need to decide on the ante bet. This will be the minimum stake all players need to pay into to start. If you are playing solo or on a live casino version, you just choose your bet and start the round.

When that is done, the current dealer will start drawing cards. Card are dealt counter-clockwise, with each player receiving three facedown cards. You can look at your cards, which means you get to play your cards as a Seen bet. Another alternative is to play Blind. Seeing your cards gives you an advantage, but means you have to bet twice the amount of a blind player to keep going.

After the first round, players need to decide if they want to keep going or not. Folding is a valid option if you feel like your hand is not good enough. Frequently folding weak hands is considered tight play. In the opposite direction, players who bet on weak hands to accelerate the showdown are loose players. Much like poker, players keep pushing each other until it is time to reveal the cards.

The end result of each Teen Patti round is decided depending on what cards you draw. There is a reason why people refer to it as Indian poker. Card combinations have a clear hierarchy that determine who won. We listed them below in an easy to understand format.

Even then, certain combinations within these bets are more valuable. Fortunately, these are easy enough to understand. Higher value cards like kings and aces outclass lower value cards. If both players have a Trail, the punter with better cards will be the winner.

However, these rules only count when you are playing against other players. In order to make it more single-player friendly, developers had to make minor adjustments. As a result, playing live casino or RNG-powered Teen Patti is great for people who want to keep it simple. The only real downside is that you will be playing for fixed payouts versus the flexible sums present in multiplayer. 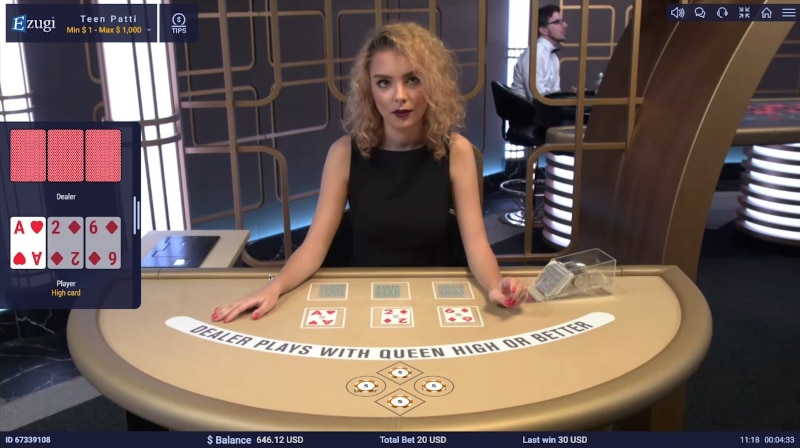 Find out how to play Teen Patti in online casinos.

If you are just starting out playing this game, we definitely recommend sticking with these versions. For starters, betting is considered significantly easier! You just select how much you want to play, and the round starts. This makes bets predictable and makes money management much simpler.

We did not expect Teen Patti to become as insanely popular as it has in recent years! Players from across the world have learned to enjoy this title, and we could not be happier for it. Now, you have the convenience of playing a distinctly Indian favourite anywhere in the world! There lies the beauty of Online Casino, Online Gambling & Variations. The ability to play what you want, when you want, for whatever price suits you!