Microgaming is one of the largest software providers on the market. Where most developers can field one or two games per month, they can launch dozens. Partnering with multiple software providers allows Microgaming to deliver quality titles faster than anyone else. If you like their titles, you will be happy to hear you have many options to choose from this April. Here are our personal highlights.

Microgaming progressive jackpots have always done quite well. They have performed so well, in fact, that the developer launched a new progressive jackpot series called the WowPot. Just a month ago, we saw the launch of the Sherlock and Moriarty WowPot slot. Now, we are seeing another addition to the WowPot series with Neon Valley Studios’ Queen of Alexandria WowPot.

Other bonuses include expanding Wilds and re-spins. Wilds can only appear on reels two, three and four, meaning you can get a maximum of three re-spins. The game is played on a five-reel board with ten fixed paylines. Wins are formed by finding three or more matching icons in adjacent positions, starting with the leftmost reel. Winning combinations must follow an active payline, or their cash prize will not be paid.

We are not sure if this is the first Microgaming Megaways title. If not, it is certainly the most notable one of the bunch. The team partnered with Buck Stakes Entertainment to take players on a rowdy pirate adventure. Sail across the seven seas in search of great treasure. How great, you ask? This highly volatile pirate experience comes with a 6000x jackpot for the luckiest sailors among us.

Winning this top prize requires the assistance of various special features. The easiest to understand is the Firepot. Find at least three Firepot symbols to win a cash prize. The prize increases up to eight icons, which grants a maximum 2000x payout. Firepots can land by themselves, or can be revealed using mystery symbols.

Other bonuses worth keeping in mind are rolling reels and free spins. Rolling reels can grant multiple wins at the cost of a single spin. Free spins give you a spin of the bonus wheel, which determines how many free spins you play. It also assigns a multiplier up to 3x, allowing for the 6000x jackpot to be won. To top it all off, free spins can be retriggered. 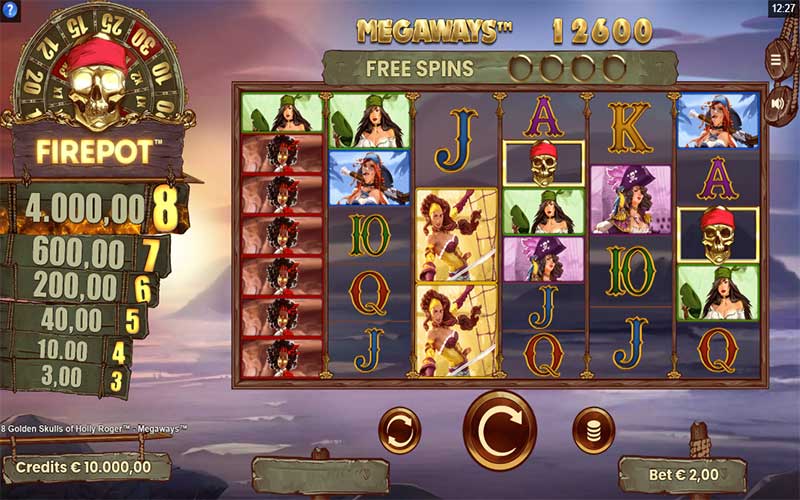 8 Golden Skulls of the Holly Roger features Megaways mechanic and is highly volatile.

We hope you know how to handle the heat. Otherwise, 1×2’s Phoenix Inferno may end up burning you up! From the moment you load in, you can see what kind of fiery experience awaits you. Lava spilling from rocks and forming pools around jagged rocks. In the distance, we see a massive sun filling most of the horizon, and another one behind it. Every inch of this slot looks impressive!

However, the game offers more than striking graphics. It has a medium-high variance and a 7500x jackpot that players can win. It is played on a five-reel board with 243 ways to win. Despite the simplified win procedure, the RTP for this title is 95%. Slightly below average, but far from the end of the world.

Available special features include stacks of Wilds and free spins. Three, four or five Scatters grants eight, twelve or sixteen free spins, respectively. Additionally, four or five Scatters remove lower value icons. Free spins can be retriggered. During the special feature, additional Wilds will appear on the board, increasing your odds of winning.

Book of King Arthur is Just for the Win’s latest entry. It pairs Arthurian legend with a high volatility and a 5000x jackpot. While fun, it follows the all too familiar design of Book-type releases.

Egyptian Tombs was another contender for the indiancasinoclub.in favourite. Being able to win up to 50 free spins and Ra symbols turning Wild was tempting. However, Queen of Alexandria ended up winning us over.