You would be hard pressed to find anyone who has not heard of Sherlock Holmes in passing. The famous detective’s stories have become popular all over the globe. They served to inspire countless TV shows and movies that kept audiences coming back to the books. Now, Sherlock and his rival Moriarty are expanding their career in a new direction. They become the stars of Microgaming’s latest release, titled Sherlock and Moriarty!

All the action takes place in an abandoned street somewhere in Victorian England. Most of the time, this will be the background you see. Occasionally, chasing after Moriarty will lead you to an ominous bridge bathed in red light.

Symbol designs are designed with plenty of attention to detail. The four human character portraits are some of the best Microgaming has ever done. It is a shame the same effort was not extended for playing card royals. They look okay, but clearly do not click entirely with the theme. Despite saying that, we doubt minor icon design flaws will ruin your impressions. The rest of the visuals are just that good!

Mystery symbols can appear on any spin during normal gameplay. They can transform into any other icon that can appear during the base game. The only symbols they cannot turn into are Scatters and progressive icons. On top of that, you can win the Mystery re-spins if you get five or more mystery symbols at once.

The icons that activated the special feature and all Wilds will be kept in place as re-spins begin. During the re-spin, all Wilds and mystery symbols become sticky. Landing one or more after a re-spin grants one more re-spin in turn. This continues until no new Wilds or mystery icons are drawn. When that happens, one final re-spin is played, during which all mystery symbols are revealed.

Three Scatters on the board grant ten free spins, with any additional Scatters adding two extra turns. As such, you can win up to eighteen free spins at once if you trigger the bonus with seven Scatters. During free spins, one of three feature icons will activate. Players can benefit from sticky Wilds, a +1 multiplier or extra free spins. If any feature symbols land on the last free spins, it will always grant more extra turns.

Players can win the progressive jackpot in this slot. Every spin has a chance of revealing one or more progressive tokens that appear on reels one, three and five. The more you bet, the higher odds you have of triggering the jackpot. Tokens can only appear during normal gameplay, and are used to trigger the jackpot wheel.

The wheel holds four jackpots: mini, minor, major and WowPot. The less valuable jackpots pay more often. Only the luckiest few will ever be able to claim the WowPot jackpot. All jackpots are shared with other games in the WowPot network. 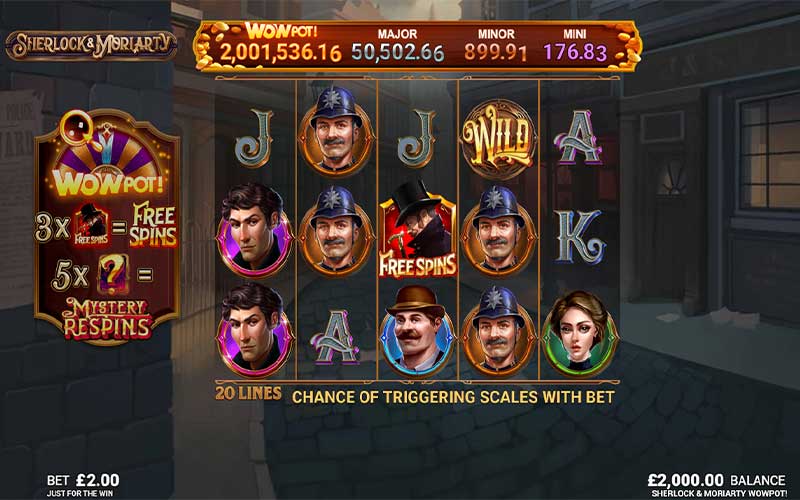 In this game, big bets significantly increase the chance of triggering the progressive jackpot.

Sherlock and Moriarty shares the WowPot spotlight with a few other fantastic Microgaming releases. Book of Atem, Sisters of Oz, African Legends and Queen of Alexandria also draw from the same progressive jackpot.

You play this release on a five-reel, three-row board. It has twenty fixed paylines, meaning we cannot turn them on or off to change our total bet. Wins are granted by finding three or more matching icons in adjacent positions, starting with the leftmost reel. All wins have to follow an active payline or the cash prize will not be paid.

Players hunting for big jackpots are used to playing with a high variance. However, Sherlock and Moriarty has a medium volatility that is more manageable. That does not make it easy to score the big progressive jackpots, however. Especially not when the RTP for this slot is 92.1%.

This game continues to impress us in almost all aspects. It offers four progressive jackpots and a variety of special features. The visuals are top notch, particularly the free spins bridge background image. It would have been perfect if the RTP were a little better. Still, the low odds are to be expected due to the progressive jackpots. There is no denying this release won the indiancasinoclub.in team over handily. We plan to keep playing, and we hope you will enjoy it as much as we have.