Few game types have benefitted as heavily from going online as slots have. Shifting all the action to a computer programme allows developers to forgo traditional design choices. They are free to play around with core concepts of what makes a slot tick! Megaways and Megaclusters have both formed as an attempt to draw players in with a more interesting winning system.

Fast forward a few years, and the two have become mainstays in online casinos. Each release handles these mechanics somewhat differently, despite both ideas coming from the same developer. Their prevalence among recently launched titles asks a question so frequently brought up by casino goers: which one is better? We break down the details of both ways to win systems in this article and help you decide which one you should play.

Megaclusters slots have been formed as a natural evolution of existing cluster pay mechanics. As a brief reminder, cluster pay games grant a cash prize when enough iterations of a single symbol appear clumped together in a cluster. Standard cluster pay games play quite nicely when combined with other bonuses. Something Big Time Gaming realized and built upon with Megaclusters.

When a winning combination is formed through Megaclusters, winning icons are split into four mini symbols. While these mini icons occupy the same position the former winning symbol did, this still allows multiple wins to form. With the right placement and a little luck, you could land several consecutive prizes because of this mechanic. This interesting system has a bright future ahead of it in the world of Online Casino, Online Gambling & Variations.

We are used to thinking about paylines and ways to win in a fixed setting. The games we play usually have twenty to forty paylines, and that does not change much. Maybe the board can become bigger during a special feature to enhance your odds of winning. However, the height of all reels constantly changing the number of available ways to win was unheard of. At least, until Megaways changed online slots forever!

Having Megaways active means the height of each reel changes every time you spin. Each reel can have as few as two or as many as seven icons available simultaneously. Of course, this means there will be times when bad luck will deal you a bad board. However, with the right luck, you can accomplish insane ways to win numbers! Special features often set you at the maximum number of ways to win, or add extra reels.

Both have their advantages and disadvantages. If you want the system with the best possible winning potential, Megaclusters are your pick. Meanwhile, Megaways slots give you an easier overview of your odds of winning. One glance at the board tells you how likely you are to land a prize. Despite these minute differences, both create a similar experience – a shot at huge wins that keeps players coming back for more. 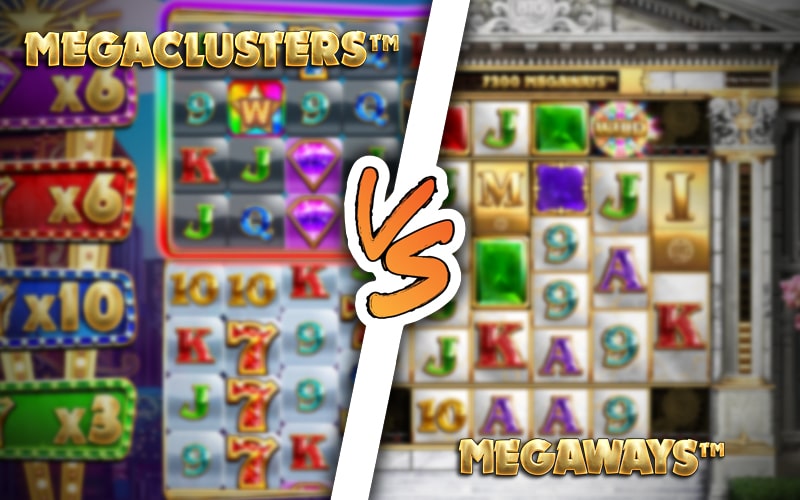 We compare Megaclusters and Megaways slots. Find out who wins.

The fact they are similar in that aspect should not be surprising. Big Time Gaming developed both engines, after all. Megaclusters, which launched in 2020, was undeniably inspired by the ultra-popular Megaways format. While fun and rewarding, it remains to be seen whether Megaclusters will achieve the same success.

One more similarity is that both systems are designed primarily for high variance players. If you play either option, you should prepare for a grind! A very lucrative one, as the top prizes these titles offer for the most persistent punters are quite nice.

If we had to pick between the two, we would opt for Megaways. Megaclusters are incredibly fun, but they are still a relatively new system. We have not seen many titles that use this mechanic. If you want a variety of games to play right now, Megaways has more options. Especially given the recent trend of many popular older releases being remade with Megaways in mind!

Fortunately, we do not have to pick. No one will force you to go for one engine over another. If you find Megaclusters more enjoyable, feel free to play that instead! Alternatively, opt for the best possible option and play both! If you enjoy high volatility, fun bonuses and big prizes, both systems will be winners for you.