Microgaming and Real Dealer studios join forces again to bring us a one-on-one baccarat experience with Holly. This is yet another addition in the series, as Holly joins Sarati and Courtney on monitors and phone screens.

As we will quickly learn, this is not your typical live casino game. While it looks similar, it is fundamentally different to what developers like Evolution are offering. In this article, we go in-depth on what you can expect from this title. How does it stack up compared to the rest of the Online Casino, Online Gambling & Variations world?

If you were expecting the gameplay loop to be different from traditional baccarat, you would be wrong. Microgaming sticks to the formula we are all quite familiar with. The only real change we can see compared to other online baccarat is fewer side bets. However, there is one aspect of Real Baccarat with Holly that will draw the attention of players.

While it may look like a live dealer game at first glance, it actually is not one. Instead, all the segments are pre-recorded. This becomes rather obvious in the dull way Holly announces the point values of each hand. Considering this is the third entry in the series after Real Baccarat with Courtney and Sarati? We expected Microgaming to improve such things by now.

Regardless, the problems is minor compared to all the benefits this game offers. You still get the awesome visuals while getting all the convenience of an RNG-powered game. For example, players are not limited with a betting timer anymore. You can take all the time in the world planning where you want to place your wagers.

How to Play Real Baccarat with Holly

The rules remain unchanged from a standard round of baccarat. As such, you start each round by placing bets on player, banker or tie bets. Banker bets have a high likelihood of winning, but have their payout decreased by 5%. That means they pay 0.95:1 when won. Even with a 5% commission, banker bets are the highest RTP bet sitting at 98.94%.

Player bets, meanwhile, are the simpler option. Their RTP is slightly lower, but they pay 1:1 instead. The RTP for player bets is 98.76%. The final available main bet is the tie, which pays when two hands offer the same hand value. It pays 8:1 and has an RTP of 85.64%. A much worse option than the other two, which is why we recommend not playing it. 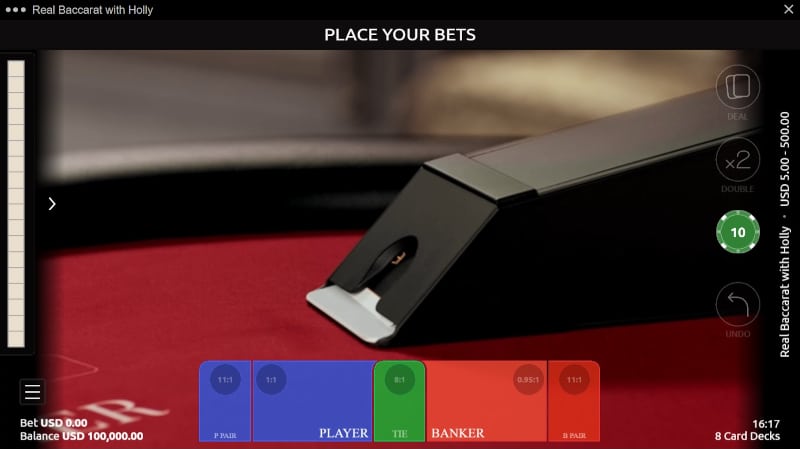 Learn more about one-on-one Baccarat with Holly, a game released by Microgaming and Real Dealer studios.

The game is played with eight decks, which are reshuffled after every round. That makes any card counting strategies impossible. Microgaming’s release also comes with a detailed roadmap breakdown that lets you track results from prior rounds. However, you should be able to employ all other baccarat strategies without a hitch.

If you were hoping for a wider range of side bets in Real Baccarat with Holly, you will be disappointed. Like in the previous two titles, the game only has the pairs side bet available. The reason why Microgaming kept things that simple is probably due to the format of this release. More side bets would require a lot of filming for relatively niche bets and payouts.

Winning the side bet is simple. First, you bet on the player or banker pairs bet. You can play both at the same time. You do not even have to place any of the three main wagers either! If your first two cards on the relevant hand form a pair, you win an 11:1 cash prize. This is the highest payout available in this release.

Should You Play It?

Despite some minor flaws, Real Baccarat with Holly is still worth checking out. If you played the previous two titles in the series, you will know what to expect. The only difference here is the dealer who will be encouraging you to keep playing. We hope Microgaming considers adding more to these games in the future. It will help them go from wannabe live dealer games to a fantastic experience all of their own.