Slots have undergone a revolution in the last decade. Developers have experimented with the very core of what makes them tick. No longer constrained by the boundaries of physical machines, these games have tried many new things. Gonzo’s Quest introduces us to the Avalanche system. Megaways Slots give us a massive amount of paylines. It feels like something innovative is always just around the corner!

Yggdrasil decided to throw their hat in the ring with something brand new of their own. The developer recently unveiled their newest game, titled Lucky Neko Gigablox. What we are interested in that new special feature. How does it work? Does it mesh with the game it is a part of? What will the developer do with it in the future? We do not have all the answers, but we will tell you all we know!

Lucky Neko starts looking innocently enough. It uses Japanese culture as inspiration. Unlike other software providers, they go deeper than just using it as an excuse to adopt an anime art style. This release is set in a building full of traditional Japanese décor. We see Daruma dolls and cat statues on either side of the reels. Tea is brewing above the cat statue, and the whole building gives off a remarkable, peaceful vibe.

If you let the game idle for a bit, you will hear a few Japanese phrases in the background. These are common words used for everyday speech like thank you. It goes a long way in building immersion. Yggdrasil really went all out in terms of graphics and theme. We can only hope their future releases will be fantastic like this one.

The game is played on a six-reel board with 40 fixed paylines during the base game. With the assistance of special features, this can increase up to eight reels with 85 paylines! It offers a medium-high variance and an RTP of 96.4%. Available bonuses include a free spins round and Blessed symbols. However, the primary attraction is the Gigablox symbols, which we will discuss in more detail!

Gigablox symbols appear on the reels, usually taking up entire chunks of the screen. They can be as small as 2×2 and can go up to 4×4 during normal gameplay. While free spins are active, Gigablox can actually increase to occupy a 6×6 position at once! This covers a huge portion of the playing field and will guarantee a win if placed in the right position. 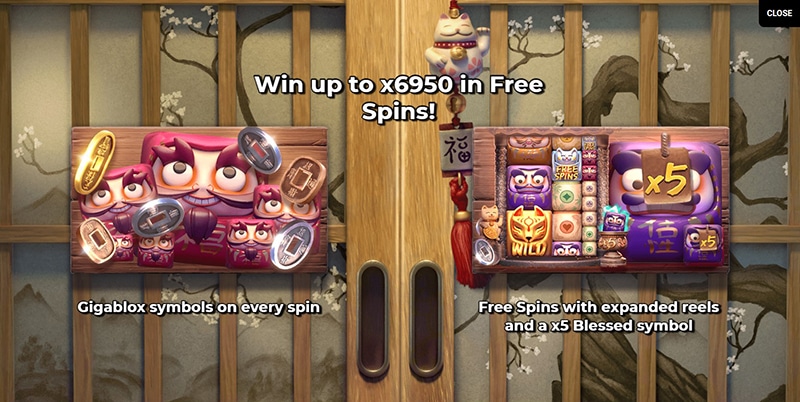 We take a look at innovative Gigablox feature developed by Yggdrasil Gaming.

We should note that these large Gigablox are not actually one big symbol. They are still several icons locked together. You can see this when a Gigablox is part of a winning combination. It is broken down into smaller pieces that highlight which icons were part of the win. There are no restrictions on what symbol can become Gigablox. Yes, that includes the Wild and free spins icons!

As an added bonus, there is nothing preventing the Gigablox symbol to become the blessed icon as well. Combine free spins, Gigablox and blessed symbols and you can achieve some wacky results. Imagine a blessed 6×6 icon, with Wilds on the remaining two reels. It would be a fantastic way to score the 6950x jackpot!

Fun as Gigablox are, they use the other two bonuses to further enhance their experience. Blessed symbols are quite straightforward in that regard. Any icon that is not a Wild or a free spins symbol can be selected. This applies a 5x increase to all wins formed using the blessed icon.

One more special feature exists – free spins! You need to land five appropriate special symbols to activate the bonus. It is more difficult to trigger, but the payoff is worth it. During free spins, the playing field increases to eight reels and 85 paylines. Each additional free spin icon adds one more free spin.

Honestly, the potential with Gigablox is infinite. The core concept is basic, but it can be enhanced magnificently with the right special features. Lucky Neko’s fun gameplay loop and beautiful visuals have certainly helped it reach the Indiancasinoclub.in shortlist for favourite video slot.

Yggdrasil have gone all out in drawing players in this year. This special feature is the third mechanical innovation, following Splitz and MultiMax bonuses. If this is what we can look forward to from Yggdrasil in the future, then we cannot wait to see what they have in store!