December is here, and that means a whole host of new titles are hitting the market! Many of these games will be themed around Santa or Christmas. Fortunately, plenty of interesting titles exist that will explore other ideas in December, many coming from studios partnered with Microgaming. In this article, we will highlight a few of our favourites that will be launching in the last month of 2020.

The ultimate goal of alchemy was to create the philosopher’s stone. The stone is a magical tool that could turn any metal into gold. Judging by all the jewels and gold coins scattered about, All41Studios have clearly succeeded in that task. They created a game that is interesting visually and is fun to play at the same time.

By now, we have seen many cluster pay slots, and they remain just as fun as ever. The mechanic is further enhanced with the addition of rolling reels that allow forming multiple consecutive wins in one spin. Every consecutive win fills the magic potion meter, which in turn unlocks additional bonuses. The sheer number of special features in Alchemy Fortunes is incredible, and we will let you discover them at your own pace.

Animal themed games always do well. There are titles whose themes might capture more immediate attention. However, this theme is usually the go-to for punters who want something simple. Something to add a bit of flavour to their gameplay, without overwhelming them. JustForTheWin and Microgaming have done a great job with the visuals, even if it will not be winning any awards.

The name rather obviously highlights that all the action is based around multipliers. They can only be unlocked during the free spins round. After all winning combinations to the total win are added, the multiplier and number of free spins increases. You also get the option to buy free spins and skip to the lucrative part faster. The payouts are fantastic, with the title promising up to 25,000x your total stake as a jackpot.

Espionage is a dangerous game. One wrong move could see you captured behind enemy lines, with little hopes of escape. This sort of high stakes action makes for great movies, TV shows and even slots! Something Microgaming and Triple Edge Studios take full advantage of when designing Assassin Moon. It sets us free in a lavish party setting, with the goal of eliminating our target. 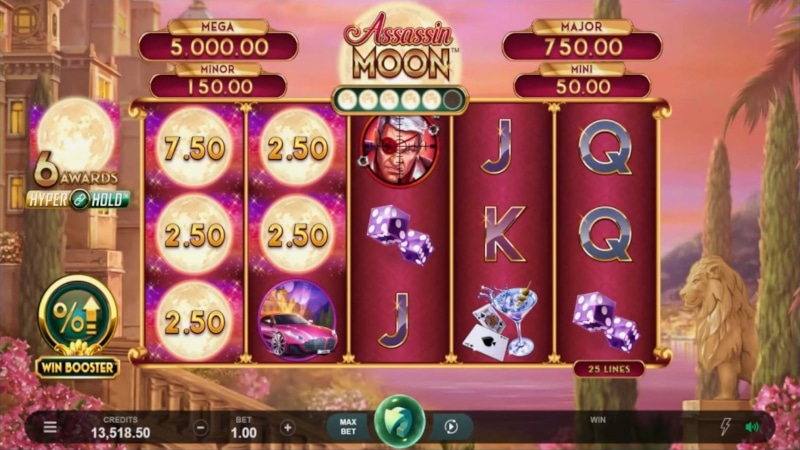 As an assassin, you want to take any advantage you can get. The software providers let you use a Win Booster, which increases your odds of activating the HyperHold bonus. It increases every bet you make by 2.5x. HyperHold freezes the reels and any moon symbols, and then grants re-spins. The goal being to land as many moons as possible and get one of four fixed jackpots. Finally, we also have a free spins round with Jumbo blocks. Each jumbo block covers a 3×3 position on the field.

With Mega Moolah’s jackpots constantly making headlines, no one is surprised by Microgaming coming back to the savannah. We are once again thrust into the realms of lions, rhinos and elephants in Diamond King Jackpots. The background image depicts an oasis where animals come to drink water. We can see green grass everywhere, and a mighty lion resting by the reels.

Interesting visuals are accompanied by the presence of an interesting mechanic in the form of the power range. The power range is increased during free spins, covering the entire playing field. Do your best to land diamonds within the power range. Each diamond that lands fills the meter, but ones that land within the range are twice as effective. When the meter is full, it will grant one of four fixed jackpots. Players can also play a free spins round by activating it manually, or buying it for cash.

These are just some of the titles we at Indian Casino Club wanted to highlight. The developer plans even more interesting releases going forward, like Book of Cats and Elvis Frog in Vegas. There will be plenty of games to enjoy this upcoming holiday season. Get comfortable, relax, and get ready for a month full of fun with Microgaming slots!