Baccarat is a simple game at its core. Guess which hand will win the round, and you receive a prize! Of course, that seeming simplicity melts away the more you pay attention. How cards combine to award points and when third cards are drawn can take a while to learn. However, unlike some other casino games, this does not give you an advantage.

Learning the rules of how baccarat hands are played changes nothing. All cards are drawn after you have already placed your bet. Even if you recognize the warning signs, you cannot do anything to stop it as you can in poker and blackjack. As a result, many punters try their luck at counting cards in baccarat to try to get some advantage. Does it work, or is it just another popular casino myth?

The Basics of Baccarat

After all wagers are down, two cards are drawn for each hand. The cards are revealed, and their score is added up. The goal is for your hand to get as close to nine as possible without going over. Draw a five and a seven, and your final score will not be twelve, but two. The ace is only worth one point, while ten, jack, queen and king are worth zero points.

When third cards are drawn depends on the hand being played. Player hands usually draw one if they are worth five points or less. Banker hands are more complicated, as they depend on both the player’s hand and their own card values. Banker bets do have a higher chance of winning, which is reflected in our online baccarat strategy!

It would not be an advantage immediately. However, as time passes and more cards are drawn, you could remember what cards are no longer in play. If you know troublesome cards that can push you over have all been drawn already, you could make bigger wagers with confidence. Great in theory, but downright impossible to actually pull off in practice.

The reason why? Online casinos know how to protect themselves from card counting. We do not think there is a single baccarat table that uses less than six decks at the same time. Most will default to eight, each with fifty-two cards. In both cases, you have a large sum of cards to keep track of. It delays the advantage you may get from using this strategy significantly.

Furthermore, online baccarat tables are usually powered using RNG software. As real decks are not in play, that means the machine can reshuffle those eight decks for every single round. There is no delay for reshuffling the decks either – it happens seamlessly every time you play a round. If you playing baccarat on an online casino table, then we can say for certain card counting will not work. 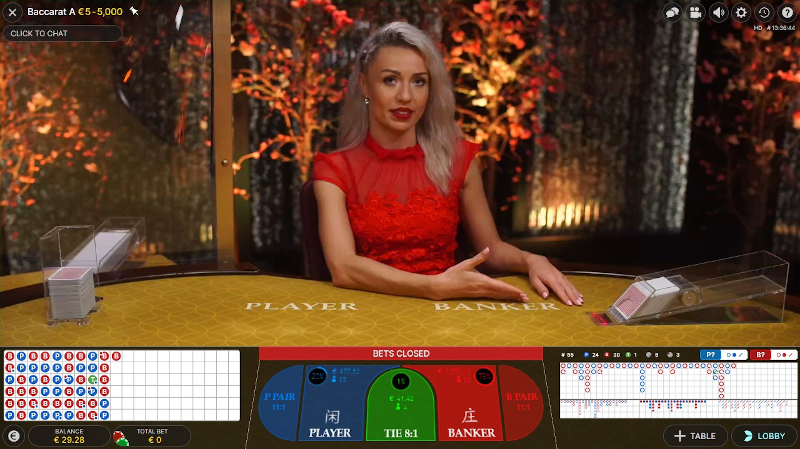 Can card counting technique be used in Baccarat?

What About Live Casino?

There are many advantages to live dealer baccarat. However, card counting is not one of them. At first glance, it does seem possible to exploit the game. Unlike tables operated by computers, dealers cannot stop to reshuffle the deck every single time. Even if they used a machine, it would significantly slow down each round, making for a less exciting experience.

However, live casino software providers are anything if not smart. They borrow the multiple decks trick for their tables, too! When they shuffle their deck, it will be a random mishmash of cards from eight different decks. Furthermore, while they are not shuffled on every round, they are still shuffled frequently. This wipes away any progress you make with card counting.

How do I Beat Baccarat?

Keep in mind that no casino game is beatable. A few of them, like blackjack, come very close. Their house edges are less than one percent when played right, which is why they are as popular as they are. However, baccarat is not one of those games. It has a larger house edge, but makes up for it in its simplicity. You play this release to relax and occasionally win, not to go all-out on.

If you want to give yourself the best possible chance of winning, the Indiancasinoclub.in staff have two suggestions! First, check out our strategy guide for baccarat, which will help optimize your gameplay. Second and more important: have fun! Enjoy the game, do your best, and do not spend more than you can afford.