Summer is in full swing, and everyone is doing their best to enjoy themselves! Software providers have been hard at work to keep their customers entertained with a steady stream of new games! It certainly feels like everyone is trying hard, trying to make the very best slots they can! That said, few developers have put in as much effort as Yggdrasil Gaming have!

Not too long ago, we discussed a brand new Gigablox special feature the team created. Today, we are looking at another unique game, developed by both Yggdrasil and Avatar UX. It borrows the increasingly popular PopWins formula that allows its reels and active ways to win to grow! Join us as we look Yggdrasil’s latest. Is it worth getting excited over?

You play this release on a five-reel board, where each reel is three symbols tall. To start with, you have 486 ways to win. The playing field can grow in size thanks to a special feature the developers put into the game! To change your bet, tap or click the current bet button. This will open another window, where you can choose a value that suits you. You can wager between ₹20 and ₹5000 on each spin.

Icons are split into three different categories based on their design and cash value. Low-value symbols are various playing card royals: 9, 10, J, Q, K and A. All six of these icons have the same cash values! High-value symbols are stylistic renditions of many animals and mythological beasts from eastern Asia. Finally, we have a single Super High-value icon! It is so rare; it can only appear on the playing field using Pops. 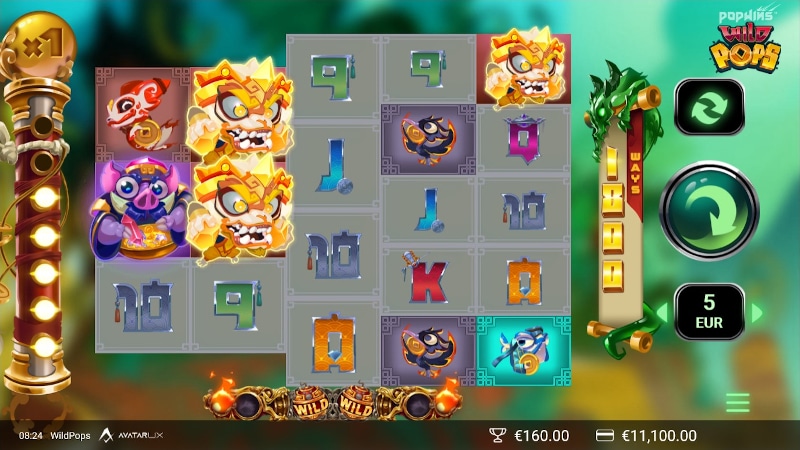 Yggdrasil and AvatarUX team up to create a great product.

Part of what makes WildPops such a stand out experience is how wins are awarded. You need three or more matching symbols in adjacent positions, following an active way to win. That said, this slot pays both left-to-right and right-to-left! As a result, you have so many more opportunities to score a win.

This is a high volatility game, so you should prepare to work for the special features! That said, it is not nearly as difficult as the original PopRocks was. The RTP for this release is 96.8%, which is quite impressive. It almost qualifies WildPops for the highest RTP Yggdrasil slots list!

A key aspect of this game is its PopWins reel expansion mechanic. Each time you win, symbols that were part of that score will disappear. In its place, two new icons are added, and the reels expand accordingly to accommodate the extra symbols. These new icons can then proceed to create wins of their own to grow the playing field even more! The maximum size the board can reach is a five-reel, seven-row playing field with 33,614 ways to win.

Each win also increases the multiplier meter we see on the left side of the reels. The meter increases by the number of icons that were part of that winning combination. The multiplier starts at one and is increased by one for every seven symbols you collect. If no new consecutive wins occur, the multiplier is reset back to one, and the next round starts normally.

Fully growing all five reels to be seven columns high grants three extra lives to the player. Instead of the reels resetting back to their usual size when no more consecutive wins are available, life is consumed instead. It also prevents the multiplier from resetting as well! Once you exhaust all three extra lives, the playing field will return to normal when no new consecutive wins are available.

Wilds are awarded somewhat randomly in this Yggdrasil release. If a player earns three consecutive wins, two Wilds will be added in random positions. This gives you an opportunity to enhance wins here and there. Furthermore, it will activate on every third consecutive win. That includes the six and ninth win, and others that come after it.

This game is quickly shaping up to be an Indiancasinoclub.in favourite! After playing it for a few hours, we honestly fell in love. The visuals are fantastic, and the variety of special features will keep you entertained for a long time! This high variance slot can pay 17,707 x your total stake if you get lucky. We wholeheartedly recommend trying it for yourselves!