Home » Casino news » What to Expect from Gonzo’s Quest Megaways?

What to Expect from Gonzo’s Quest Megaways?

Sometimes, dreams do come true. Ever since Megaways came out, many of us dreamed what new options it would bring. Others tried to imagine how older games might look with this new engine in place! Of course, it seemed like a distant dream. That is until Red Tiger Gaming and NetEnt announced Piggy Riches Megaways! Soon after that, another exciting announcement was made. A remade version of Gonzo’s Quest!

This new version has made plenty of promises. Improved graphics and the implementation of Megaways is just the start! Join us as we take a deep dive into this remade classic. Can it live up to the massive legacy left behind by its predecessor? Join us, and we will find out together!

By far the biggest and most exciting change is the addition of Megaways to the original Gonzo’s Quest. This entirely shifts the original structure of the slot. Now, players have access to six reels. Each reel can be anywhere between two to seven symbols tall. As a result, the number of active paylines can also vary wildly! It can be as little as 64 all the way up to 117,649 ways to win.

If you have never played these types of slots, they can feel somewhat overwhelming. We suggest checking out our Megaways Slots guide to get to grips with this new mechanic. If you ever went through the transition from fixed paylines to ways to win, this will not feel different at all. In fact, we would argue that this new Gonzo is far better than the original. The addition is seamless, while still respecting the original design.

NetEnt was always well known for pushing the boundaries of graphics. We are happy to see that Gonzo’s Quest Megaways continues this tradition! The visuals in the original were great for their time. The developers made full use of the increased power of modern devices to bring us a release that looks mouth-wateringly amazing!

There were no changes as far as the background or symbol designs go. Instead, all elements were given a facelift. It speaks volumes that there was no need to redesign any part of Gonzo’s Quest for the new version. That said, some new additions were needed. With bigger reels came a need for a new mask to be added to the paytable.

One of the things that made this slot so popular back in the day was the inclusion of Avalanche special feature. The bonus is also known as Cascading Reels. Gonzo’s Quest effectively popularized this special feature, so it is no surprise to see it make a return in the Megaways version! Each Avalanche increases your multiplier by one, going up to 5x.

A new bonus is the Earthquake special feature, which activates randomly. All low-value icons disappear from the reels. This allows high-value symbols to fall down and take their place. 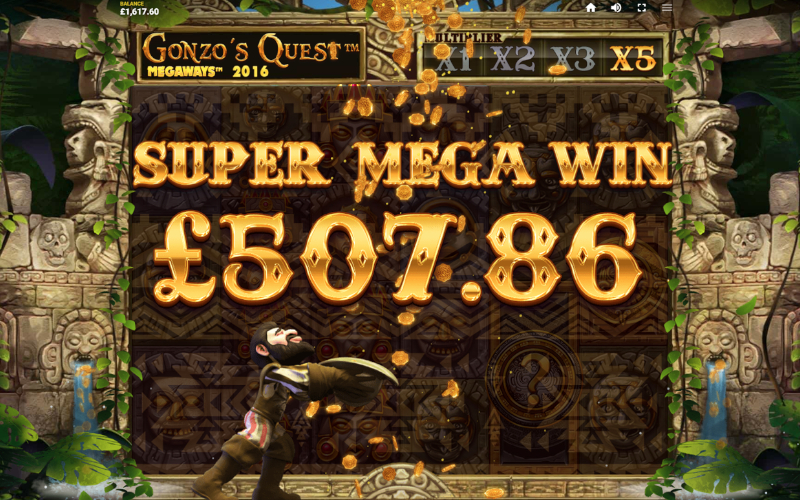 Will Gonzo’s Quest Megaways surpass the fame of its predecessor?

Unbreakable Wilds are another Megaways inspired addition. Only two can appear at the same time. One on the first three reels, one on the latter three reels. As their names suggest, they do not break after contributing to a winning combination. They stay in place, helping to create more wins!

Free spins are awarded by collecting golden Free Fall symbols. Three of them award nine free spins, with three additional spins for every extra Free Fall icon in view. Before free spins begin, you can choose to play them, or gamble them on the Royal Wheel.

During free spins, the Avalanche multiplier is improved. Now, available multiplier values are 3x, 6x, 9x and 15x. This allows much bigger wins to be formed. In all other aspects, however, the multiplier works the same way.

Gonzo’s Quest Megaways offers a medium-high variance and an RTP of 96%. You can expect a decent amount of small wins. That said, they are not the priority for this slot. The developers want you to work towards one big payout, and the special features reflect that! If everything lines up, you could be looking at a win worth 21,000x your total stake!

We spend a lot of time covering Online Casino, Online Gambling & Variations. However, it is rare that we ever see a slot of this quality appear. Red Tiger Gaming and NetEnt have outdone themselves recreating Gonzo’s Quest. This is one release you do not want to miss!