When Lewis Caroll wrote Alice’s Adventures in Wonderland back in 1865, we doubt he knew just how big it would be. A hundred plus years later, it has made for a variety of popular movies, TV shows and games! Even in 2020, the story of Alice falling into a different world makes for an interesting theme. Two new titles decided to use this theme for their own benefit: Queen of Wonderland Megaways and Adventures Beyond Wonderland!

If you are looking for a visually attractive slot, you do not have to look far. Queen of Wonderland Megaways looks awesome, as it depicts the twisting maze-like gardens in front of the Queen’s castle. The visual spectacle is enhanced further by awesome symbol designs. We can see a mix of playing card royals and characters from Alice in Wonderland stories. The queen is the most valuable icon, worth 25x for a six-of-a-kind win.

The game offers several interesting special features. Cascading reels allow us to score multiple winning combinations at the cost of a single spin. Players can also benefit from cash re-spins. Players get three re-spins, which is reset every time the winning combination is extended. When no more re-spins occur, the special feature ends. Players can also play a free spins round with a progressive multiplier.

Players can earn both bonuses individually, or buy them using the Queen of Hearts bet. The cost of purchasing the bonus bet is 100x your total stake. The special feature is guaranteed to grant free spins or re-spins. You have a 50/50 chance of getting either option!

This highly volatile release was developed by iSoftbet. It is played on a six-reel board with the Megaways system active. This means the number of ways to win and the height of all reels is constantly changing! Punters can bet between ₹20 and ₹2000 on each spin. It has an RTP of 96.11% and a maximum win of 37,500x your total stake.

The Wheel of Adventure Calls!

Not too long ago, we had the pleasure of playing Evolution’s Crazy Time. It ended up being one of the most interesting lucky wheel titles we have ever played! However, Playtech may end up taking that position from them in their new game. Though it offers a similar gameplay loop, this version will appeal to Alice in Wonderlands fans far more. Characters from the books frequently appear while playing, adding to the experience of interacting with the dealer.

Despite offering different special features, the math model works out similarly in Crazy Time and Adventures Beyond Wonderland. Playtech’s release has an RTP of 96.06%, and is played on a fifty-four segment wheel. Eight of these segments are reserved for bonuses, meaning you have a 14.8% chance of drawing a bonus every spin. 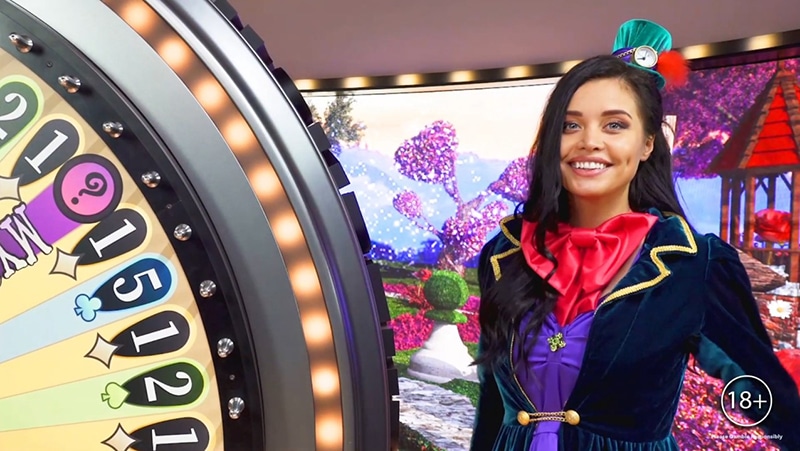 Find out more about two games themed on Alice in Wonderland.

What sort of bonuses are available? For starters, we have the 2 Wonderspins and 5 Wonderspins segments. During Wonderspins, we have an inner and outer ring. The outer ring can draw one of the characters from the Alice in Wonderland story, each with its own win multiplier. There are also no-win, eat me and drink me segments. The inner wheel consists of multipliers or extra spins that are added to the game round.

Start the Magic Dice bonus round to enjoy a special feature like no other. You get a six-column, four-row board, where you can draw multipliers or advance arrows. The dice you have chosen determine how far you progress. Land on a win multiplier and you get the cash prize while landing on a green arrow advances you to the next row.

Finally, we have a mystery bonus that is activated randomly. It can draw a win multiplier up to 10x, or you receive a random multiplier that is applied to a free spin. It is definitely one of the more useful special features available in the world of Online Casino, Online Gambling & Variations.

No matter which option you go for, you will not regret it. We had a blast playing both titles, and we know you will love them too. Both will make you work for your wins, that much is inevitable. However, behind their highly volatile gameplay lie some of the largest jackpots currently available. Do you have what it takes to win them?