Home » Casino news » Evolution’s Crazy Time: Why It Is Most Fun Live Casino Game Yet?

Evolution’s Crazy Time: Why It Is Most Fun Live Casino Game Yet?

Live casino games have expanded in recent years. Originally, they offered recreations of our favourite games played with real dealers. With a growing audience came the need to create new variants. While we see plenty of new tables, the most experienced software providers know they cannot rely on existing games forever. They need something that is undeniably theirs.

With this in mind, Evolution Gaming is at the forefront of live casino innovation. While they are not the only name in this space, they are easily the most prominent one! Over the years, we have had the pleasure of trying their cool new ideas. Deal or No Deal, Monopoly Live and Side Bet City are just a few of their unique offerings. Today, we will take a detailed look at a new Indian Casino Club favourite: Crazy Time!

Players who have experience with money wheel games will know what to expect. The game is played on a colourful wheel, with 54 segments in total. Each segment contains a number or a bonus game symbol. Even then, they are not separated equally. You have 9 bonus segments and 45 numbered segments. The less valuable a number is, the more segments it has on the wheel.

When betting starts, you can bet on the four available numbers (1, 2, 5, 10) and the four available bonuses. You have to place a wager on a field in order to earn its prize. At the same time, if you bet on all eight options, you will always lose money. The goal is to find a happy middle ground. Similar to other live casino game shows!

Before every spin, the camera will pan above the wheel. If a number or bonus symbol line up with a multiplier on the screen, you gain the benefit! If another number or special feature is drawn, the multiplier does not increase your gains.

Coin Flip is the most common bonus, as it has four segments on the playing field. The coin has a red and blue side. A random number generator decides the multiplier for both, and a machine flips the coin. The displayed multiplier will be the prize you win for that round. There is also a random chance of a Rescue Flip, where the coin is flipped again.

Cash Hunt appears on two segments on the wheel. You are taken to a separate screen with 108 different multipliers! They will be shuffled and hidden behind random symbols. Aim and shoot at any part of the screen. This will reveal the multiplier prize hidden beneath. 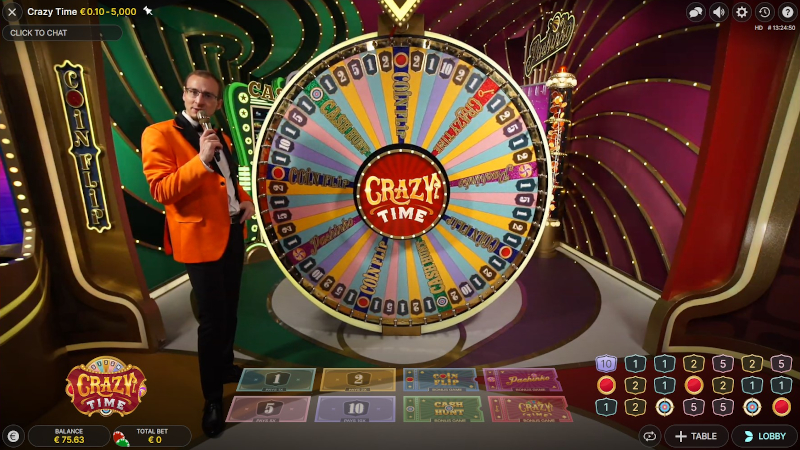 Pachinko is also present on two segments. The host picks up the ball from the bottom and climbs the stairs. There are sixteen drop zones, and one of them is chosen randomly for the ball to fall down. As the dealer releases the puck, it moves down to either fall on a multiplier prize or a Double. Double increases all prizes by 2x and leads to another round of Pachinko.

Crazy Time is the rarest special feature since it only has one segment on the wheel. You are taken to an entirely different room with a massive virtual wheel! This wheel has 64 segments and 3 flappers with different colours. Pick a colour, and watch the wheel spin, awarding you a multiplier prize. In case the flapper lands on a double or triple, all prizes are increased and another spin is played.

Fundamentally, this Evolution Gaming release all comes down to luck. You cannot change the course of a round as you can in blackjack. However, you can play it smart and increase your odds of coming out on top.

Normal game wins are not that impressive. Even with an active multiplier, you will never be able to match the impressive special feature wins. As a result, we advise playing all four available bonuses with each round.

At the same time, you will want to play at least one or two numbers. We suggest going for two or five. They have an okay payout and appear frequently enough to cover your wins. Not always, but here and there when you get lucky.

Make sure that the money you wager on bonus rounds is not too much. If you get a number win, that should cover your losses for all other bets you make. Going big with bonus round bets is a quick way to quickly lose money.