Slot games launch at an incredible speed nowadays. In fact, some software providers are capable of producing a new one every month! Add a global market where hundreds of companies are competing, and it can be quite difficult to keep up! With so many new games launching every day, finding the right one can be a full-time job.

Thankfully, you do not have to try each title by yourself to find out! Our crack team of experts got together and made their pick for the best slots of June 2020. If you are looking for something new to play, we recommend any of the following titles.

While many software providers focus on what is currently popular, Quickspin is content doing their own thing. They have a loyal following due to the superb quality of their games, and Arcane Gems is no exception! The graphics in this release are incredible. Furthermore, you get a mouth-watering 5625x jackpot to look forward to!

When you score a win, those icons are locked in place. Each new symbol that expands the win is also locked, and another re-spin is played. If a reel is completely covered in winning icons, it awards a random multiplier ranging from 2x to 5x. These two systems working together can create some incredible wins, which is what makes Arcane Gems so good.

For Asian-themed slots, most people immediately think of China and the colour red. However, there are developers that treat these cultures with more respect than just a quick cash grab. One of them is Yggdrasil and their latest creation, titled Lucky Neko. It takes place in a Japanese doll shop, full of statues meant to bring good fortune.

Visual fidelity is only part of why we love this release so much. It also marks the first launch of the Gigablox special feature! These are massive icons ranging from 2×2 to 4×4, which sync across several reels to form a win. It also comes with a thrilling free spins round. The playing field and the number of paylines are increased dramatically. Free Spins Gigablox is a 6×6 size, which allows players to win a 6950x jackpot.

Regular reels a touch too boring for you? Then Betsoft’s The Hive will be an ideal pick! The reels are made to resemble the inside of a beehive, which is a nice touch. That said, there is a lot more to this game than a unique reel and pretty graphics. We can also enjoy its low volatility, frequent wins, and an RTP of almost 97%! 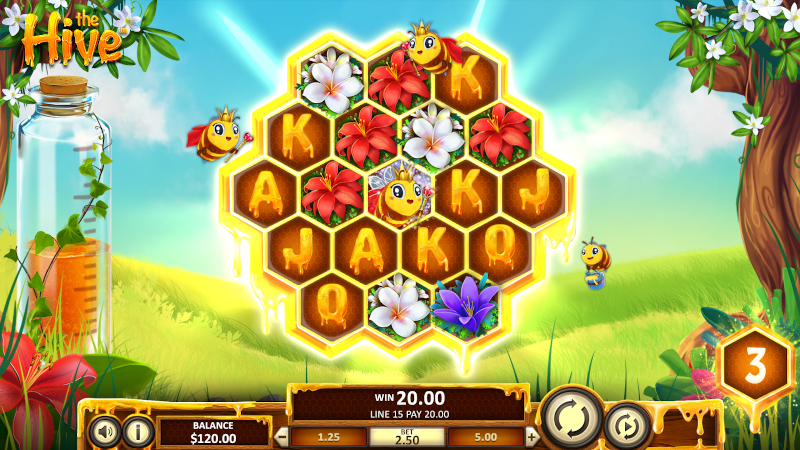 Find out more about the best slot games released in June 2020.

Each spin has a chance of creating one of three different bees that move around the grid. After a random number of spins, these bees fly off, leaving behind beneficial bonuses! On top of that, players have access to a free spins round, activated by filling the Honey Meter. During free spins, players can benefit from spreading Wilds!

Slots based on rock bands are incredibly popular right now. The latest entry is Play’n Go’s Twisted Sister, based around the same band. You may not recognize the name, but you have heard their hit song “I Wanna Rock” for sure! The song blasts in the background while you spin the reels and try to score its 4500x jackpot!

If you enjoy games with many special features, then you will love this title. It is played on a 6×6 playing field with cluster wins. Players can benefit from several bonuses during normal gameplay. Non-band members being removed, selected symbols turning Wild and band icons transforming into one symbol are all bonuses! On top of that, there is a free spins round with an increased multiplier and a brand new Megaband symbol.

Last on the list of Indiancasinoclub.in favourites is the Age of Conquest slot, created by Microgaming and Neon Valley Studios. The graphics look beautiful, immediately immersing you in its fantasy world of magic and potions. Pick this title if you want frequent, but smaller wins and engaging special features!

Each reel has a diamond meter above it. Every time a diamond appears on the reels, it fills one position. When both positions above a reel are filled, that reel turns Wild for two consecutive spins. During free spins, you have three options to choose from. Less free spins but more Wild reels, or vice versa? What you choose depends on how risky you want to play this release.