Few things can get used as excited as high RTP slots do! Usually, playing slots instead of casino games comes with an understanding you’re accepting a higher house edge. But that doesn’t have to be the case, as these releases show us!

We’ve taken a look not only at RTP but also the diversity of each title. We’ve also made sure to avoid slots which aren’t available in India. So you can play everything from this list without worrying about clones or restricted titles!

And just in case you need a refresh, we have an article explaining online slot RTP. Armed with this new knowledge, let’s set off to find that one release that perfectly suits our tastes!

You can’t have a list of High RTP NetEnt slots without including this game. NetEnt has made a few games that come close to its RTP, but none were able to beat it. It even comes close to rivalling blackjack’s 99.41% RTP, which is a big accomplishment for a slot!

That said, it leans more onto the classic slot side of things than modern day video slots. It’s played on a 3×3 board, with 7 fixed paylines.

Just to clarify, we’re talking about the original Bloodsuckers from 2013. The sequel, while much more visually appealing, has a smaller RTP of 97%. Not that the original game is really lagging behind. The atmosphere it offers is still wonderfully creepy to this day, even if some symbol designs are in dire need of an update.

Of course, there’s more to this slot than just it’s RTP. It also gives us a free spins round with tripled wins and a bonus game. The bonus game has you going through the vampire tombs and opening coffins to unveil cash prizes. 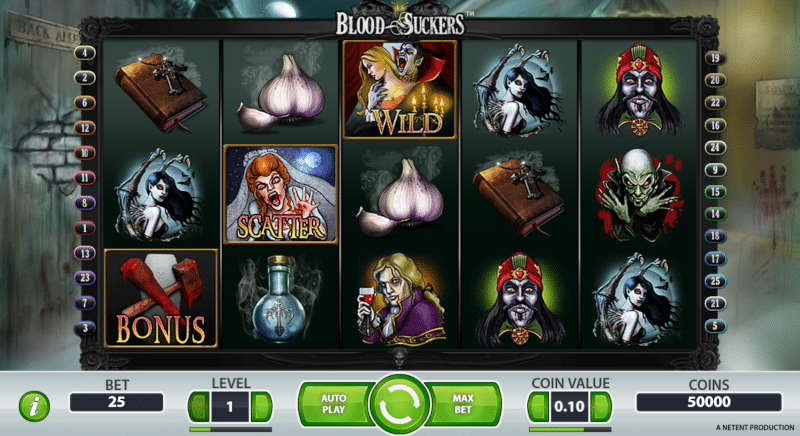 Are regular slots not fun enough for you? Looking for something new and thrilling? NetEnt’s Kings of Chicago perfectly showcases the developer’s drive for innovation! Have you ever wondered what a marriage between slots and poker would look like? We have, and received this awesome release as an answer!

The graphics aren’t amazing, but they immediately catch your eye. The standard 5×3 slot layout is preserved, but the background image is clearly a poker table. All the symbols have also been swapped for cards. This isn’t just a visual change, either. To form a win, you need a three-of-a-kind win following familiar poker hands. The natural royal flush is the most valuable, worth 2000x your total stake.

You have two non-standard cards: Scatters and Joker Wilds. Joker Wilds appear with a 2x multiplier, making them incredibly valuable. Meanwhile, you use Scatters to activate a free spins round, complete with a minor cash win. Add these two bonuses together, and you can get a massive jackpot, worth over 13,000x your total stake!

Back in the day, Jack Hammer showed us how to save the day and win the girl while scoring some good wins. Its sequel follows in its footsteps while adopting a wide variety of improvements. One of those improvements is the RTP, which increased to a satisfying 97.07%.

Other goodies that await players is a free spins round. During free spins, you can look forward to bonuses like a 2x multiplier and the sticky win special feature. A solid improvement across the board!

Most of the games we mentioned are older NetEnt titles. But here’s a very recent Indian Casino Club favourite: Hotline! Depending on the number of active hotlines, the game comes with multiple RTP settings, the best of which goes up to 97.04%. It has an amazing theme that’ll take you back to the glory days of Miami in the 1980s.

The gameplay is what truly wins us over. Expanding Wilds and re-spins can only appear on hotlines. You get one by default and can turn on two more for an extra betting cost. On top of that, you have a free spins round to keep things interesting!