Quickspin Step Up Their Game with Vampire Senpai & Artemis vs Medusa

It was only recently that Quickspin started to set itself apart from other software providers. For a long time, they earned moderate success by coasting on safe trends. With a secure position, they were able to start making fantastic games and gained a bigger audience as a result. Judging by their latest releases, it seems that trend is not stopping anytime soon!

Today, we look at two very promising titles that guarantee a fun summer for slot punters. They play around with some basic slot elements and offer interesting special features to keep us engaged. Furthermore, both games offer incredible jackpot prizes if you get insanely lucky. Let’s see what Quickspin has in store!

Elements of Chinese culture being used as slot themes is nothing new. However, there is no denying they have exploded in popularity with the growth of the Asian market. Vampire Senpai seeks to capitalise on that while remaining respectful to the original culture. It introduces us to the concept of Jiangshi, a hopping vampire that feeds on the life force of the living.

Before the action starts, this release looks quite idyllic. It is obvious a lot of effort went into the background image. The sunset mixes perfectly with beautiful crimson trees and Chinese architecture. All the plant life shifts back and forth slightly under the influence of the wind. Even on the reels, we can see some symbols blink or move their eyes around.

The game is played on a five-reel, five-row playing field with 40 fixed paylines. We were expecting a release with cluster pay mechanics given the layout. However, that is not the case. Vampire Senpai is a medium variance slot with an RTP of 96.19%. The maximum possible prize you can take is a mouth-watering 8,800x jackpot! It also offers a wide variety of interesting special features.

When a vampire Wild lands on the reels, it converts any surrounding human icons into turned Wilds. These turned Wilds can then also transform any other human symbols that are adjacent to them. Each spin also has a chance of creating between three to nine talisman Wilds on the first four reels.

Last, but not least is the free spins round. Collect three, four or five to unlock seven, nine and twelve free spins, respectively. Any vampire Wilds that land on the playing field will remain there for the rest of the special feature. Instead of disappearing, they will hop to a random reel position at the start of each free spin. Any additional talisman or vampire Wilds that land grant an extra free spin.

Ancient Greece has always done well as a slot theme. Now, the developers at Quickspin are leveraging it for a thrilling showdown between a goddess and a monster! On one side is Artemis, daughter of Zeus and goddess of the hunt. On the other is the vile Medusa, whose gaze can turn victims to stone! 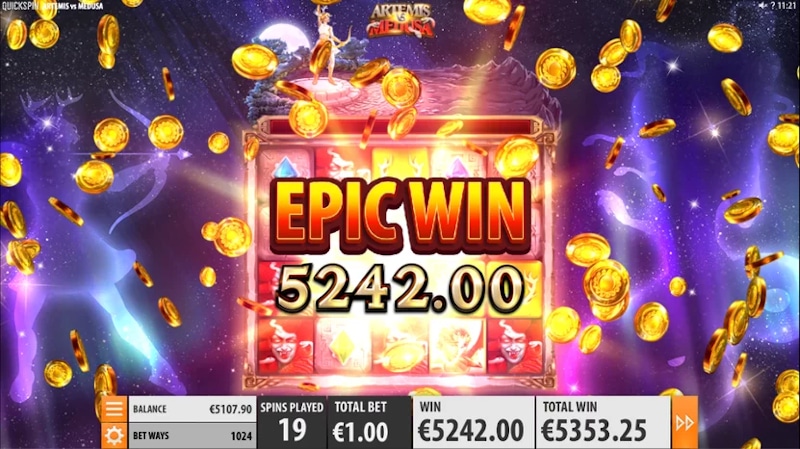 The battlefield this battle takes place in looks incredible. Two giant soldier statues stare at each other, marking the entrance to a mountainous valley. The sun illuminates the clouds, giving them a gorgeous golden colour. If there was ever going to be a warzone for deities, this would undoubtedly be it!

You play this game on a five-reel, four-row board with 1024 ways to win. This release has an RTP of 96.12% and high volatility. This makes wins difficult to achieve, but they usually offer some incredible prizes to make up for that! The maximum prize you can win in this Quickspin release is 5288x your total stake.

Monster icons can have a small golden coin attached to them. If a golden framed Artemis symbol lands on the final reel, all present coins are collected. Their value is combined, and a bounty payout is awarded.

Collect three Scatters to win the unlimited battle free spins special feature. Whenever an Artemis icon lands on the reels, all monsters are collected on the meter. Furthermore, a type of monster will be eradicated from the reels. If the meter exceeds 15 bars or Artemis slays all the monsters, the free spins end.

Both titles offer fun gameplay and incredible rewards. The team at Indian Casino Club had a blast playing both! If you are looking for something to spice up your summer, we definitely recommend trying these two releases out.