For many slot players, Playtech is a familiar name. However, the team has been hard at work expanding their portfolio outside of slots. One of the areas this developer has grown the most are live casino games. Here, Playtech is capable of competing with the best software providers on the market. They have launched a variety of engaging titles that put them on the map and the upcoming live titles that we are excited about are Who Wants to Be a Millionaire live games.

With their experience working with Hollywood studios on slots, we expected a licensed live casino game eventually. Thanks to the recent set of agreements Playtech signed, that will be happening. The software provider will be launching Who Wants to be a Millionaire live games in the next five years. They will also be delivering their superb content to a greater audience than ever before.

The largest recent announcement came as part of the deal Playtech signed with Sony Pictures Television. As part of the arrangement, the software provider would make three highly innovative Who Wants to be a Millionaire live games. The contract stipulates the developer to launch these three titles over a five-year period. As such, we can expect plenty of interesting titles to appear in Playtech’s live casino game show library.

Both sides seemed quite happy with the arrangement. Stephan Zingg, SPT UK’s commercial director praised Playtech Live for creating some of the most innovative online gaming experiences. He expressed confidence that the Who Wants to be a Millionaire brand would deliver new elements of entertainment.

Excitement is not exclusive to Sony’s side of the deal. Playtech’s COO, Shimon Akad, commented that the company was proud to be chosen as Sony’s partner for this project. Playtech Live CEO, Edo Haitin, praised Who Wants to be a Millionaire as a worldwide favourite brand.

There is no doubt in our mind that these three games will end up incredible. Especially if we consider the enthusiasm present on both sides and Playtech’s talented developers. The software provider has hinted towards these branded titles being a one-of-a-kind experience going forward. Whether they will be able to deliver on that remains to be seen!

A few days prior to this announcement, Playtech also signed a deal with 888 Holdings. The arrangement will bring the very best RNG and live casino games to 888 Casino. Without a doubt, this will also apply to the Who Wants to be a Millionaire games when they launch.

On top of that, Playtech will also host a branded 888 studio in their state-of-the-art live casino in Latvia. It will include several leading live casino games and a few exclusive titles! This includes releases like Live Slots, Spin a win and Adventures Beyond Wonderland.

This deal is huge news for both sides. 888 casino will benefit from a selection of new games for its existing players. Playtech will be able to access an even greater audience because of this arrangement. Finally, both sides will benefit from growing interest in Playtech’s increasingly innovative live casino game library. 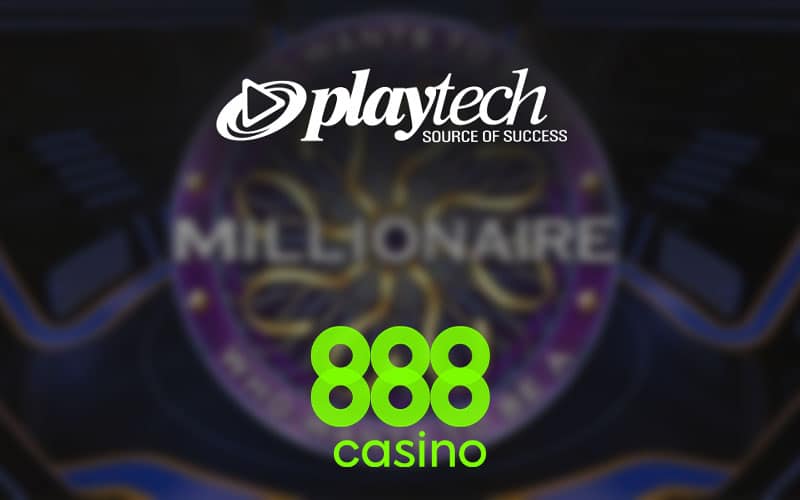 Players will be able to play Who Wants to Be a Millionaire in 888 Casino once the game is launched.

888’s Head of B2C Guy Cohen commented that Playtech’s games would provide new, exciting and engaging gaming experience. He said 888 casino was looking forward to welcoming Playtech content and growing their partnership. Perhaps by incorporating a much anticipated game show based on a popular brand owned by Sony when it launches?

Both of these arrangements show something obvious. Playtech is looking to expand aggressively in the live casino space! The deal with 888 casino includes RNG-powered titles, as well. However, the bulk of the deal relates to their live dealer games. 888 will even be launching an exclusive studio with Playtech to benefit from their fantastic library of games.

Plans for expansion are made even more obvious with the Who Wants to be a Millionaire deal. Three releases carrying the name of one of the most popular game shows ever is nothing to sneeze at. Indeed, the team at indiancasinoclub.in will be keeping a close eye on this software provider in the future.

Until then, though, we advise checking out Playtech’s new Andar Bahar table. It is unique in that they hired dealers that speak Hindi natively. Clearly a follow-up on their Live Hindi Language Roulette that charmed Indian players everywhere.