For the longest time, live casino games were a novelty in themselves. They were something new and cool. A way to experience your favourite games with people on the internet. It was revolutionary! You could receive the brick-and-mortar casino treatment straight from the comfort of your own home! But the novelty eventually gave way to structure. Live dealer games have found their place in almost every online casino.

Once their popularity was secure, software providers could start trying new things. They opened with simple things. Variants of popular casino games received their live dealer adaptations. Most developers were keen to stop there. But one saw the limitless potential in offering a brand new way to play. This is the tale of the game show live casino games, and the software provider responsible for them!

There’s no denying many developers have their own live casino games. But we don’t think anyone can claim to have advanced live dealer titles as much as Evolution Gaming! The team has been at the forefront of almost every notable innovation that happened in this space. And that constant drive to improve has yielded impressive results. They are, by far, the most popular live casino software provider.

A brand new category of games would start taking shape in early 2017. There, at the International Casino Exhibition (ICE) in London, the team presented a taste of the future. A game almost everyone has tried at least once! Their first lucky wheel: Dream Catcher.

It was a smashing success. There are a total of 54 tiles on the money wheel, labelled 1, 2, 5, 10, 20 or 40. Your job is to guess which number is drawn. The bigger the number, the better the reward! But it’s also rarer. There were also two non-winning segments. These were multipliers. Silver granted a 2x increase to the player, while gold awarded a 7x increase. Sweet and simple; perfect for casual punters.

Evolution Gaming showed to the world that Game Show games are possible. And now that the initial gamble paid off, the team decided to offer more releases. They expanded on the success of Dream Catcher with Monopoly Live. The wheel may be similar, but there’s a lot more to this game than a licensed name! 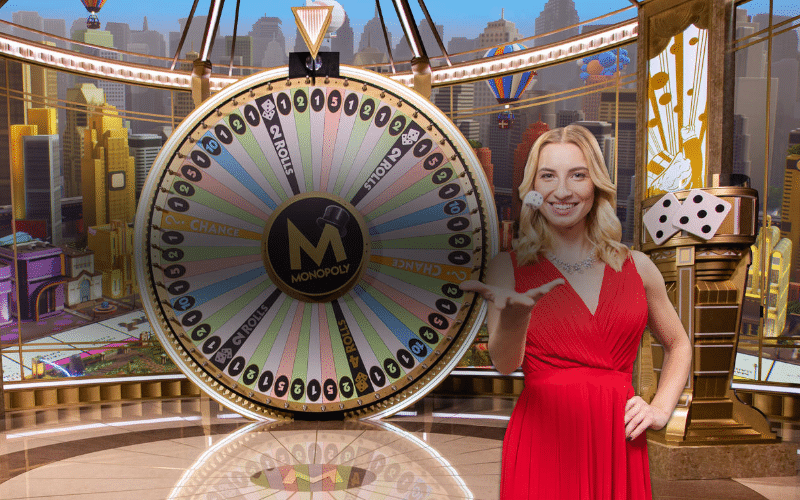 Monopoly Live wooed us with its inclusion of Monopoly themed special features. You can draw Chance cards to get multipliers or cash prizes. You also have a 3D bonus round where a pair of dice control your Mr Monopoly. As he moves about, he collects money and can benefit from other bonuses. It served as a wonderful expansion of the success Dream Catcher offered.

At the same time, the team began experimenting with brand new games. Dream Catcher was great, but they couldn’t just remake it over and over again. They opted for an interesting idea. Let’s take your standard poker table. Add neon everywhere to give it an 80’s aesthetic. And then only allow side bets!

That was the birth of Side Bet City, one of Indian Casino Club’s personal favourites! In it, you’re betting on the sort of win that will occur. It can either be a three-card, five-card, seven-card, or all lose side bet. You don’t compete with other players here. Instead, all wins are determined based on a paytable. It’s a fast-paced release, perfect for relaxing.

One more success for the developer was Deal or No Deal. Based on the popular TV game show, players were able to put themselves in the hot seat! Each round starts off with a preparation stage. At this point, you’re just spinning in hopes of qualifying. To qualify, you need to get all three ring pieces in the slot. If you can do that before the first round starts, you get to play!

After qualifying, players can spin more to increase the value of each briefcase. We commend doing this, as it benefits you in the long run. Once that’s done, the actual game begins! The dealer will open the first three briefcases and will offer you their average. You can accept or reject the offer. He’ll then move on to the next set, and make the average offer for them. This repeats until it’s down to the last two briefcases!