Marilyn Monroe is a name that needs no introduction. She was the first big star produced by Hollywood and remains an iconic figure to this day. The fact her name is enough to carry a brand new idea from Playtech shows as much! Will this brand new slot be able to carry the same dazzle as Marilyn Monroe herself?

The game does have some big shoes to fill, but we certainly think it has the potential to achieve it. With an interesting special feature mechanic and three progressive jackpots, it could easily become a player favourite. If that sounds like something you would enjoy, come with us as we take a deep dive into this title! 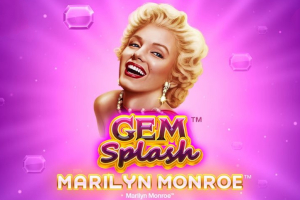 Gem Splash: Marilyn Monroe is played on a five-reel board, where each row is four symbols tall. There are thirty paylines, which you cannot disable manually. In order to win, you need to find three or more matching icons next to one another. Winning combinations must start with the leftmost reel, and have to follow one of the currently active paylines.

Playtech’s slot has an RTP of 96.47%, which is above average. It has medium volatility and a fantastic maximum prize. After all, you cannot beat a progressive jackpot in terms of raw numbers! Players can wager between ₹10 and ₹50,000 on each spin. The exact betting range may vary depending on the online casino you are playing with.

Two things are important to this game’s theme. Big gems and Marilyn Monroe! Both are heavily represented on the playing field. We see lovely roses, an old-school microphone, a radiant gem and Marilyn herself as high-value symbols. We also have high-quality special icons like a pair of crimson lips and the gem-shaped Splash and Drop symbols.

Really, the only icons that did not catch our attention were the playing card royals. They look okay, but compared to the awesome quality of everything else, it just does not match up. There are quite a few cool animations present throughout the reels. The background is kept simple. We see a purple background, with Gem Splash symbols falling by the reels and disappearing below.

On each reel, there is a chance a Gem Drop icon will appear. When they land on the reels, they move one position down until they disappear from the reels. Each Gem Drop displays a prize, which is paid once that symbol is combined with a Gem Splash icon. Prizes can range from 1x to 100x! Once a Gem Drop grants a cash prize, its value will be increased for the next spin.

Collect three or more Scatters to unlock six free spins. When the bonus begins, any existing Gem Drops will be removed from the reels. Meanwhile, brand new ones have a chance of appearing as you play the special feature. This includes Big Gem Drops, which can cover 2×2, 3×3 or 4×4 areas.

These Big Gem Drops will pay their attached cash prize even if just one position inside it is filled. If multiple Gem Splash symbols land in the Big Gem Drop grid, it will pay the associated reward every time. If three or more Scatters are collected during free spins, you can win six more bonus turns.

Every spin has a chance of activating the Jackpot Game. The odds of triggering the special feature increases with the size of your bet. That said, activating the bonus does not guarantee you will win one of those three jackpots. You can also win a cash prize, ranging from 10x to 100x your total stake.

Was Gem Splash: Marilyn Monroe as world-shaking as the actress whose name it borrows? Unfortunately, the answer is no. However, this is still a fantastic release and one that can keep you entertained for hours. The randomness of Gem Drops and Gem Splashes aligning just right to create big win chains is incredibly satisfying.

A big portion of this slot’s success comes down to the three progressive jackpots it offers. Playtech is well known for awesome progressive jackpot titles, and this one certainly lives up to expectations. We here at Indian Casino Club had a blast playing this game. If you are looking for something new to entertain you, it is an easy recommendation from us.