Have you ever tried your luck with rummy before? It is one of the better-known but rare card games in online casinos. Rummy is not as popular as blackjack or poker, but it still has plenty of variants that you can enjoy. It gives casino members something new to play and experienced punters a new game to master.

While you are learning the best rummy strategies out there, you may see various terms being thrown around. What does declaring mean? What is a Wild Joker? What is a closed deck in rummy? Read on to find the answers to all of these questions!

13 Cards Rummy, also known as Indian Rummy is played with two to six players. This is the most popular game format currently available online. It has three variants, which include Points Rummy, Deals Rummy and Pool Rummy.

Points Rummy is the simplest of the three. It is fast-paced game, where winnings are determined by different point values. Winnings are calculated based on the accumulated points of losing players.

Deals Rummy is played with a fixed number of deals. All players get the same number of chips to start. At the end of every deal, the losing players surrender their chips to the winner. After the fixed number of rounds end, players are ranked based on their chip count.

In Pool Rummy, all players collect money to play the game. Pool Rummy plays similarly to Points Rummy. It has two versions; 101 Pool Rummy and 201 Pool Rummy. The goal is to drive your opponents over 101 or 201 points, respectively.

Players will also find several single-player versions of rummy online. Three Card Rummy is one such option, which can be played against virtual dealers. It is a simplified version of the game that is very easy to pick up and play.

Another available online option is Gin Rummy. This release does not use jokers and aces are worth one point.

Ace – The card marked with the letter A. It can be used as a card smaller than two to form a run as Ace, two and three. However, it can also be used as a card bigger than the King to form a Queen, King, Ace run. Aces are worth ten points unless specified otherwise, like in Gin Rummy.

Best of Two/Three – Available for Deals Rummy tables. Players play two/three rounds. The player with the highest number of chips when those rounds end wins.

Buy In – The entry fee you have to play before starting a round.

Closed Deck – The pile formed by cards that are left after cards are dealt to players. The cards are placed face down.

Declare – When a player completes their goal, they finish the game by discarding a card to the finish slot. This is called declaring.

Discard/Open Deck – The pile formed by cards that are dropped by players during each round. Discarded cards always go in the open deck.

Drop – Players can quit the game early to minimize their losses by dropping. The amount of points you lose depends on how early you drop. 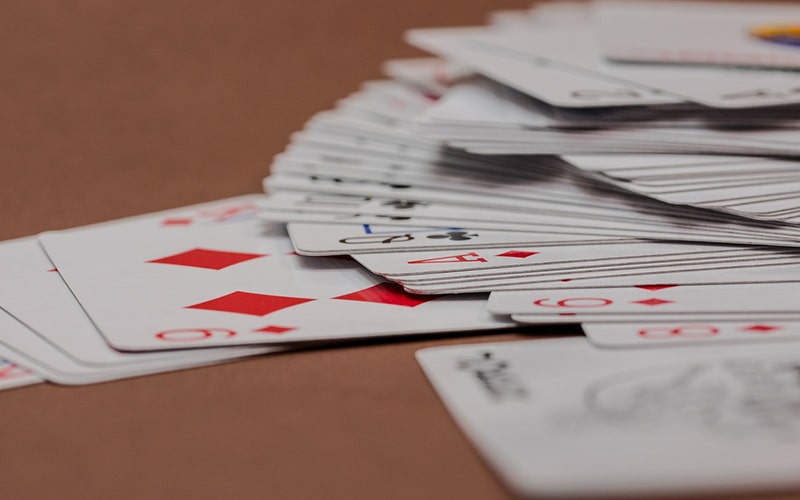 We present you all the terms that can be used while playing Rummy.

Impure Run/Sequence – A collection of three consecutive cards of the same suit, with a joker filling in for one of the cards.

Joker/Wild Joker – A card that can be used to substitute for any card to form an impure sequence or set.

Points – Each card has a certain point value. The goal of the game is to decrease your points to zero through melding. As such, the less points you have the better off you are.

Pure Run/Sequence – A collection of a minimum of three consecutive cards of the same suit, without a joker filling in.

Run/Sequence – A collection of at least three consecutive cards of the same suit.

Set – A collection of a minimum of three cards with the same number but different suits.

Unmatched Cards – Cards that are not part of any winning combination. How much each player loses is determined by counting the points of their unmatched cards.

Rummy is a criminally undervalued game in the world of Online Casino, Online Gambling & Variations. As such, we highly recommend checking it out if it interests you! If you do, keep this glossary handy. It may come in useful.