The original Twin Spin was one of NetEnt’s most popular titles at the time. While its era may have passed, many players still fondly remember the original title. As such, it made for the perfect candidate for NetEnt to remake using the Megaways license! There are a few more additions hidden under the hood, which we will discuss in this review.

When doing a follow-up on a beloved classic, the last thing you want to do is upset its original fans. That is why Twin Spin Megaways looks exactly how you remember it looking. The larger background image and bigger reels make the experience far more enjoyable. On top of that, all of the animations have been drastically improved. This makes watching the action to fold far more fun!

Similar to the background image, the developers decided to keep the same symbol designs. The only change is that they improved their quality. Otherwise, they have remained unchanged. Something fans of the original will no doubt appreciate. You can find six playing card royals, cherries, bells, bars, lucky sevens and diamonds on the playing field.

This mechanic is great, and it is enhanced even further thanks to NetEnt’s Avalanche bonus. Every time a winning combination occurs, symbols that were part of the win will be removed from the board. Existing icons will fall down to fill in any empty spaces. At the same time, brand new symbols will appear from the top, ensuring the reels are always full of icons. You can land multiple consecutive wins in a single round using this bonus. 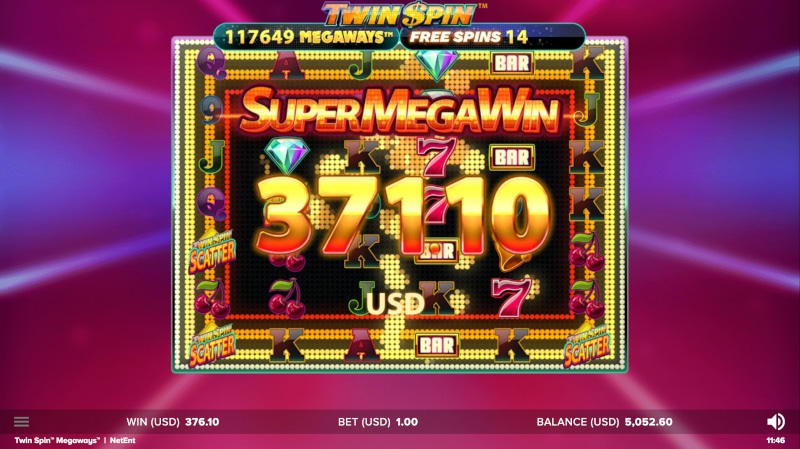 Wilds can appear on reels two, three, four, five and six. They can substitute for any symbol except for Scatters when forming a winning combination. During free spins, Wilds can appear with a 2x or 3x multiplier attached. These win multipliers only take effect if the Wild is participating in the win.

In order to activate free spins, punters need to land five Scatters. This grants fifteen free spins. If players land more than five Scatters at the same time, every additional Scatter will award one more free spin. You can also win fifteen additional free spins by drawing five Scatters during the special feature. On top of offering the Wild multipliers, this bonus guarantees the maximum reel height for linked reels.

This slot gives players six-reels and up to 117,649 ways to win! Thanks to the Megaways system, the height of each reel is constantly changing. The maximum prize you can win playing this release is 38,000x your total stake. This is a fantastic jackpot, and one worthy of Twin Spin Megaways’ high volatility. The RTP for this title is 96.04%, which is above average compared to other slots.

Every year, the Indian Casino Club team remains impressed at how NetEnt can deliver on high-quality games every month. This release is just another addition to that already flawless record. Gorgeous graphics and fun bonuses would have drawn a sizeable crowd no matter what. However, when it is combined with such a massive jackpot and high volatility, you have the recipe for a long-lasting title. We had a blast playing Twin Spin Megaways, and hope you will enjoy it just as much.