Evolution is well known as one of the biggest live casino software providers in the industry. They have effectively pioneered the concept, bringing a new era of immersion to audiences across the globe. That said, live dealer games are still not for everyone. Some punters prefer single-player variants, while others remain sceptical about live casino games.

In order to accommodate the largest possible audience, Evolution Gaming introduced First Person games. These are RNG-powered versions of their most popular titles, played from a first person perspective. In this article, we will break down the details behind these titles and highlight some of the best releases.

As we previously mentioned, there are no rule differences between the live casino titles and these games. If you are uncertain about how to play a specific release, you can load up the First Person version. It will be functionally identical, and it removes the pressure of knowing how to play optimally. It also removes one of the most pressure inducing things new players face – a constantly ticking timer!

This makes any kind of First Person game great for mastering strategies or learning how to play. If you have never played roulette, you would not want to jump straight into the live casino version. However, when you feel ready to play with other players and live dealers, you can just select the Go Live button. This immediately swaps you to the live dealer release, without having to quit out of the game.

However, there are some downsides to playing First Person titles. To begin with, they do not have demo modes like many other RNG-powered releases. Similarly, if you prefer live dealer games because you consider them more transparent, practising on software-based tables is not ideal. Despite these sacrifices, we feel as though First Person games have their place.

Mega Ball is one of the most interesting games Evolution Gaming have produced in recent years. It combines elements of lottery and bingo, to create something we have not had a chance to enjoy until now. The First Person version of this title keeps the same user interface and betting system we see present in the original. If you want to take this release at your own pace, you cannot go wrong choosing First Person! 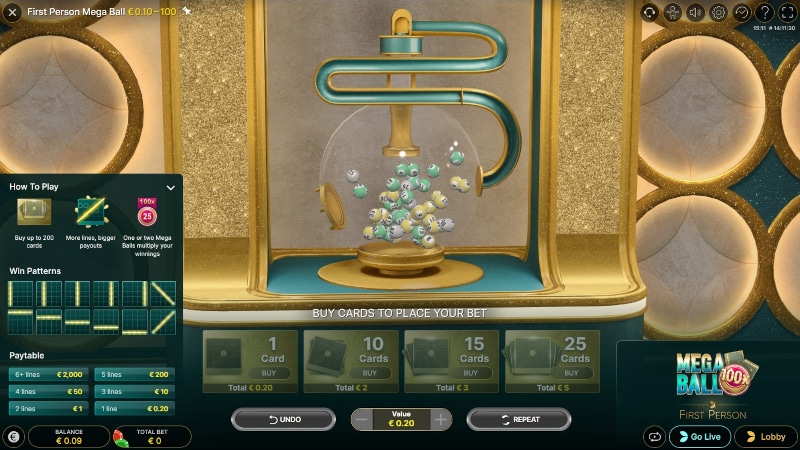 What are First Person games and how they work?

Another addition to the developers’ First Person library is its Craps game. While Craps was popular in brick-and-mortar casinos, it has not seen much play in online settings. At least, until now! Evolution Gaming’s iteration of this release is fantastic. As many Indian players do not have experience with this game, we suggest playing the First Person version first!

You can also enjoy roulette, blackjack and baccarat tables in First Person mode. We fire these up in the extremely rare occasion there are no available seats at any of the tables. For those hunting games that are more exotic, you can check out Lightning Roulette and Dragon Tiger in First Person, too.

If you have already played the live casino versions of these titles, you will know what to expect. We at Indian Casino Club enjoyed the time we spent on each release, but your preferences will vary. Evolution Gaming is constantly adding to the library of first person games, as well. Even if there is nothing that interests you now, you may find a fun addition in a month or two!