Most popular casino games have their roots in titles that have been played for ages. This has allowed them to become refined and perfected by decades of history! For most punters, this is a huge plus. However, those who are experience with these titles may eventually find them a bit too familiar. Forcing software providers and operators to come up with new variants for these releases.

One of our new favourite additions has appeared in the blackjack market. Here, live casino developers have given us access to a new version of this famous old game. If you ever thought payouts in traditional blackjack were too low for your liking? Then these games will be the delightful topping on top of an already delicious cake! Join us as we look at two of the most popular live dealer blackjack tables with multipliers.

If we are looking at the game that started it all, it is definitely Playtech’s win. Quantum Blackjack was the first iteration of this concept, and showed there was obvious interest in the concept. The promise of a tantalizing win, far higher than the original 3:2 reward, was enough to drive many to try that release. Many ended up hooked on the changes, and ended up with a new favourite blackjack game!

Quantum Blackjack is played with eight decks that are reshuffled at the end of every round. No cards are added or removed here. At the start of the round, up to three cards will be highlighted with a multiplier. If you create a winning combination with that card, the multiplier will increase your final reward! In order to make this possible, the dealer will push instead of losing on a three-card bust.

Players who play the game following an optimal strategy will be able to achieve the optimal 99.47% RTP. That said, it is not a game for everyone. It has a huge winning potential, up to 1000x your total stake. As a result, the variance is much higher than your usual round of blackjack. As a result, we think everyone should try it at least once. Whether you stick to it is something you can decide after playing a few rounds!

While definitely inspired by Playtech, Evolution Gaming’s version tackles multipliers in a different manner. They are no assigned using a random number generator. Instead of doubling, you can down triple or quadruple your hand if you want to. The developers also allow you to double, triple or quadruple after splitting your hand, without any further restrictions! 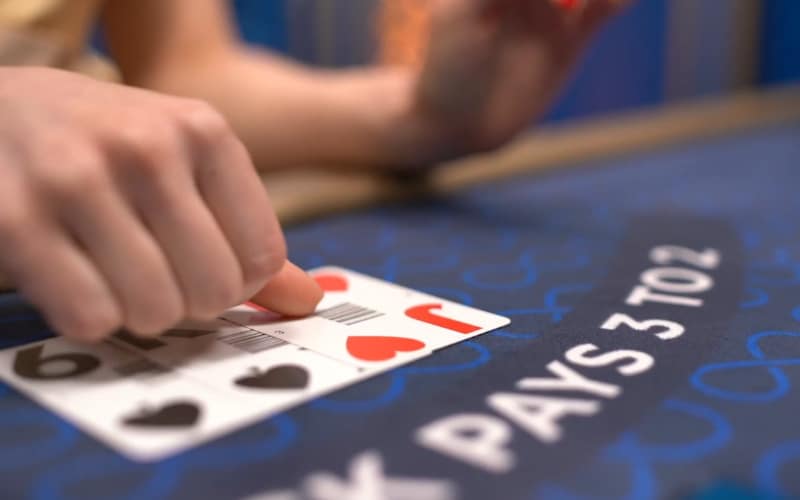 Learn more about the hot new feature in live blackjack.

Like its predecessor, Power Blackjack is played with eight decks. Here, nines and tens have been removed from all decks, resulting in 64 fewer cards in the shoe. This creates an opening to try new strategies! Dealers will check for blackjack if the dealer’s up card is J, Q or K. You will be offered to buy insurance if their up card is an Ace. One more thing worth noting is that this release has more side bets than Playtech’s version.

How much you win ultimately depends on how aggressively you use the double, triple and quadruple features. The largest payouts come from the four available side bets, topping at 250:1. However, if you want to get the maximum 98.80% RTP, you will have to skip on playing any side bets. If you are familiar with the basic blackjack strategy, you will only have to adapt it slightly to suit this game.

Which One is Better?

There is no doubt in our mind that other versions of this concept will eventually launch. However, in the live casino space, these two software providers are currently the only ones who have it. Of course, when you have two iterations of the same idea, it is natural to ask which one is better! As always, the answer is not so easy to give, even for the experienced staff at Indian Casino Club!

At first glance, Playtech seems to have the upper hand. They have a higher RTP and a stronger top payout. However, it lacks the same level of control you see in Power Blackjack. There, you decide when to play your multipliers by tripling or quadrupling certain hands. As a result, this decision is not a matter of quality, but preference. Play both, see which one suits you best, and hope you score a mouth-watering win!