How to Play Gin Rummy?

Developers are always hard at work designing new and interesting ways to play games we already know. We see plenty of variants when it comes to blackjack, roulette, poker, and even rummy! Three Card Rummy is a particularly popular version favoured by online players but is far from the only one. If you are willing to search for it, you can also find Gin Rummy. Hands down one of the better rummy versions out there!

If you have already played a round of rummy before, you will know what to expect here. There are no major changes to the way winning combinations are created. That said, it has a few minor changes that make it just that little bit different. In this article, we will go over these changes, as well as how to play this rummy variant.

No changes are immediately apparent when you first launch Gin Rummy. That said, there are a few minor changes right from the start. The number of punters at one table is smaller, up to a maximum of four instead of the usual six. The title is also not played until a specific score is reached. Instead, you keep playing until someone makes a flush, straight or set win.

You also have some minor adjustments in the way scoring is handled. By ‘Going Gin’, you can immediately earn 25 points. How do you achieve this? You need to arrange all your cards in sets and runs without any shared cards. For example, you have five cards: seven of spades, seven of clubs, seven of hearts, eight of hearts and nine of hearts. Here, the seven can either form a set or a run, but not both at the same time.

Finally, no jokers are used in Gin Rummy, which is in sharp contrast compared to the standard rummy table. In this version, Aces are always worth just one point. These small changes make each round faster. If you want to get as many rounds as possible in a single session, this is the game for you.

How It Is Played

Cards are dealt to the player and computer. Both sides receive ten cards, with one card being drawn for either side until both have the required number. Your goal now is to get rid of the cards in your hand by forming sets and runs. A set is three or four cards with the same face value. A run is three or four cards that have a different face value but share the same suit. 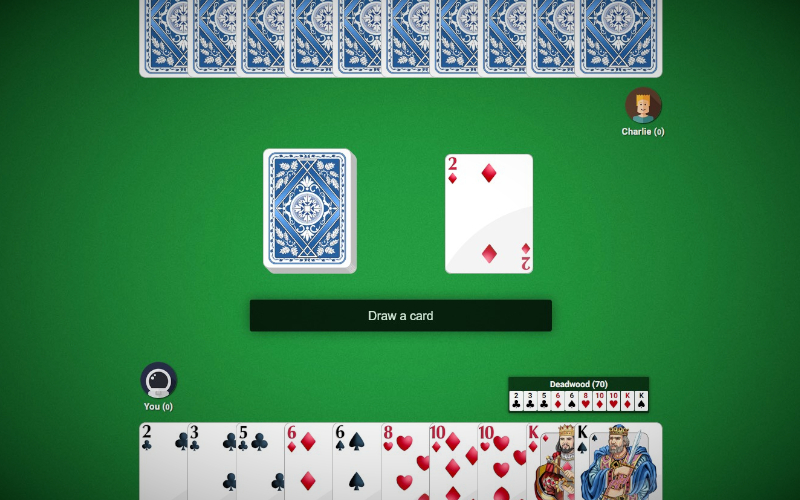 Learn more about Gin Rummy and how to play the game.

There are two ways to end the game. One is to Go Gin, as we previously described above. Another option is to go Knock. If the value of your unmatched cards is below ten, you can immediately end the round. In both cases, the point total of the other player’s unmatched cards is how many points you win. The next round begins, and the game keeps going until one side reaches the required number of points to win!

If you like rummy but want something a little different, Gin Rummy is a great pick. The core gameplay remains the same, but the way you score points is different. It keeps things interesting, as you have to get rid of your cards as quickly as possible. The more cards your opponent has in their hand when you beat them, the closer you are to victory.

As such, we at Indiancasinoclub.in thoroughly recommend checking out this title. The little differences add up, and form a unique experience compared to the standard table game. Will it ever surpass the original? It has the potential to, but we are not too sure about its odds. What we are sure about is that it is incredibly fun to play. Give it a try and trust us. You will not regret it!