The world of online gaming has exploded in recent years. With the rise of smartphones, the internet has become a lot closer to many of us. With more people playing online, it led to an increase in software providers to meet the rising demand. One of these new developers was Big Time Gaming, who launched their first game in 2011.

While the team saw some popularity, they would not become a household name just yet. It would take until 2017 when the team debuted Megaways slots for players to notice them. Join us as we look at some of the highest RTP games made by Big Time Gaming. You may find yourself a new favourite while doing so!

Megaways is usually more than enough to draw punters in to try a game. Combine it with a chance to win big and an RTP of 97.72%, and you have a guaranteed hit! White Rabbit explores the world of Lewis Carroll’s Alice in Wonderland and does it magnificently. The otherworldly feeling is present from the moment you first launch this release thanks to the symbols and background image.

This slot comes with several bonus features. The sleeping caterpillar will occasionally wake up and add up to four bonus Wilds to the reels. Trust us; you want these bonus Wilds since they come with 2x or 3x multipliers attached! Megaways and Extending Reels allows the playing field to grow to a massive size! Extending Reels are only active during free spins.

You can win fifteen free spins by collecting three Scatters on the second, third and fourth reel. During extra turns, a cupcake symbol has a chance to land. When it does, it transforms into two icons, increasing the size of the reel it landed on. Reaching the maximum height of twelve symbols grants up to twelve more free spins! With all of these awesome special features, you are looking at a 10,000x jackpot. 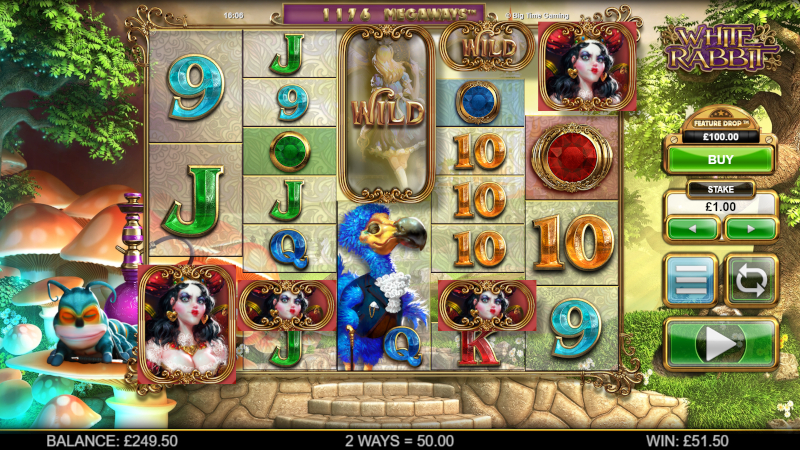 Check out our selection of Big Time Gaming slots with high return to player percentage.

Fun fact: this was the first game made by this developer the Indiancasinoclub.in team ever played! If you are used to modern Big Time Gaming titles and their Megaways system, this slot may be a bit of a shock. Feathered Frenzy looks great despite being an older game. This release offers you twenty flexible paylines and a five-reel board full of cute birds.

Players who enjoy more straightforward slots will adore Feathered Frenzy! It has a free spins round activated by collecting three or more Scatters. This nets you fifteen extra turns, during which all wins are tripled! You can keep retriggering the free spins round, earning you up to 180 extra turns in one go. Keep an eye out for Wilds, as they double any win they are a part of. You can also earn a 10,000xpayout for a five-of-a-kind Wild win.

Join us for an adventure in outer space! As distant stars and galaxies zoom past us, we have just one goal in mind: scoring a big win! Punters who take on this Starquest can look forward to the Megaways system that can create up to 117,649 ways to win! This high variance game is focused on a single bonus feature; the full reel Wilds!

The final Big Time Gaming entry we are looking at takes place at a busy village market. There, we can find all sorts of vegetables and fruits. Most importantly, we are looking for chilli peppers! They bring us the best wins and are used to activate several fantastic special features!

Extra Chilli uses a Megaways system with an extra reel beneath the main playing field. After every win, winning icons disappear, allowing new ones from above to take their place. Find three Scatters to win eight free spins, during which an unlimited win multiplier is active! If you really want to risk it all, you can also try and gamble your free spins!