Slots have been around in one form or another for ages. As technology advanced, these colourful boxes offered a simple game of chance. Put in the coins, spin the reels, and hope you win! There weren’t any rules to learn, or complicated strategies to memorise. You just crossed your fingers, and hoped you got lucky! That kind of thrilling simplicity is hard to beat.

Of course, slots today are a whole different beast. They didn’t have a tradition that kept table games mostly the same throughout the years. This, combined with better hardware and steeper competition meant slot developers had to innovate. Some offered new and interesting bonus rounds. Other casinos introduced the concept of progressive jackpots. And the most creative came up with the idea of slot tournaments!

What are Slot Tournaments?

If you’ve never played one, the concept might seem foreign to you. After all, slots are very much a game only one person plays. So how do you translate that into a competition which involves multiple punters? The answer is to measure their performance, and grade them on the basis you set. This will vary from casino to casino, though some specifics remain the same through it all.

Tournaments measure your performance using points. The people who can accumulate the most points by the end of the competition win! Tournaments usually only last for a few hours. Though we have seen ones that last for weeks, if not a full month! We have yet to come across a slot competition that lasts longer than that. At that point, we imagine player interest starts to fizzle out.

How do you get points? This will depend on the casino hosting the tournament. Some operators will tie it to a specific task. Triggering the special feature or winning a specific combination of symbols. Some will give you a set number of spins, and ask you to get as big of a win as possible during that time. Slot mechanics are quite varied. Which means slot tournaments have plenty of conditions to test punters on! 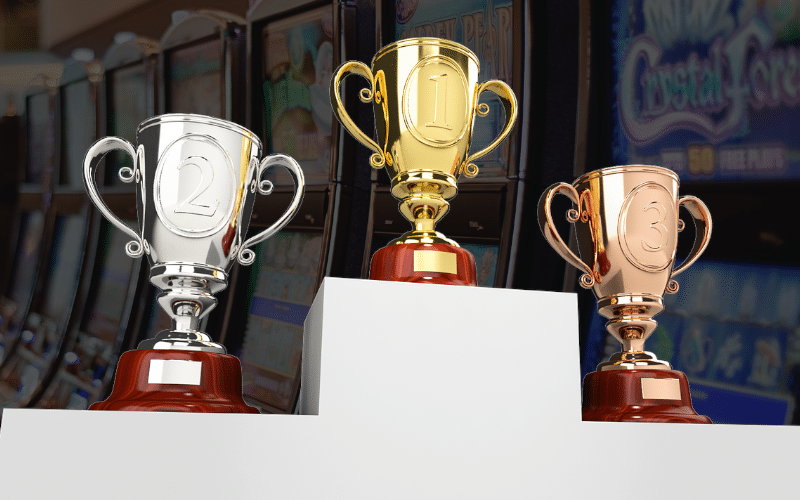 What are slot tournaments, how they work and how to come out on top?

Two of the most common slot tournaments are buy-in and freeroll competitions. Buy-in tournaments require the player to pay a small sum before entering. The money then contributes to the prize pool, meaning the prize you win from such a tournament is better. Freeroll competitions, in turn, are given without any monetary cost. They can be completely free, or awarded via loyalty points.

A particularly fun hybrid we’ve seen is a freeroll tournament with a set condition. After you play your set spins, you’re done. Unless you’re willing to pay for another entry to improve your score! That way, dedicated players sponsor punters who don’t have as much cash. And while they have more chance to win due to having multiple entries, luck is still the final determining factor.

Naturally, there’s no way to brute force a win. Some tournaments will allow you to have multiple entries. Others may instead sell you the option to keep going. Either by extending your time limit, re-starting the tournament, or just outright continuing with your current score. If you come across such a tournament, you’ll probably want to avoid it. Odds are, there’s someone who cares about winning more than you’re willing to spend.

That’s not to say the situation is hopeless. There are certain tips which apply to all tournaments. Of course, it’s a lot easier to implement these for freeroll competitions, since you’re not shouldering the cost. Still, the prize for winning a tournament is much better than the game itself will offer. So it might be worth to grit your teeth and follow the guidelines regardless!

First and foremost, spin fast. No matter the tournament, you only have a set amount of time before it ends. In the same vein, wager as much money as you can afford. This obviously isn’t an issue for free spins, but you’ll want to go for big bets if possible. More money spent means greater chance of winning. And finally, always double-check the rules before signing up! Casinos reviewed by the Indiancasinoclub.in team should be safe to play. So feel free to pick whichever one best suits your fancy!