Get Ready for Quickspin’s Titan Thunder Wrath of Hades

Greek mythology has always been at the forefront of interesting slot themes. The variety of stories leave room for many interpretations of mighty deities and cool monsters. Quickspin is hardly the first one to use Greek gods as the backdrop for their title. That said, we do believe they have done a great job with their latest title, Titan Thunder Wrath of Hades! Join us for a deep dive of this game and its multiple intricacies.

The leading characters in this tale are Zeus and Hades, who are two of the most valuable symbols available. Symbol designs are done quite nicely, as we see the Parthenon, a hippogryph head, a goblet and a laurel wreath. Meanwhile, lower value icons are four playing card royals: J, Q, K and A. Zeus is the Wild, while Hades is the Scatter. Scatters can only appear on reels one, three and five.

What really won us over was the background image. We see several Greek-style buildings erected on floating islands. We even see water falling from one of them into the sky below. The background shifts during one of the free spins rounds. We get a cool transition downwards, where the gates open and reveal Hades. The remainder of the bonus is spent among jagged rocks and flames heating the bottom of the reels.

Keep a lookout for golden coins. They will appear with a cash prize attached on every spin. Find six of them in any position to activate their special feature. Triggering icons will be locked in place, and three re-spins will be granted. Every time a new coin lands on the board, it will be frozen in place, and the number of re-spins is reset to three. Players can win cash prizes or the minor and major jackpots. If all fifteen positions are filled with coins, it grants the mega jackpot instead. This title offers fixed jackpot prizes. 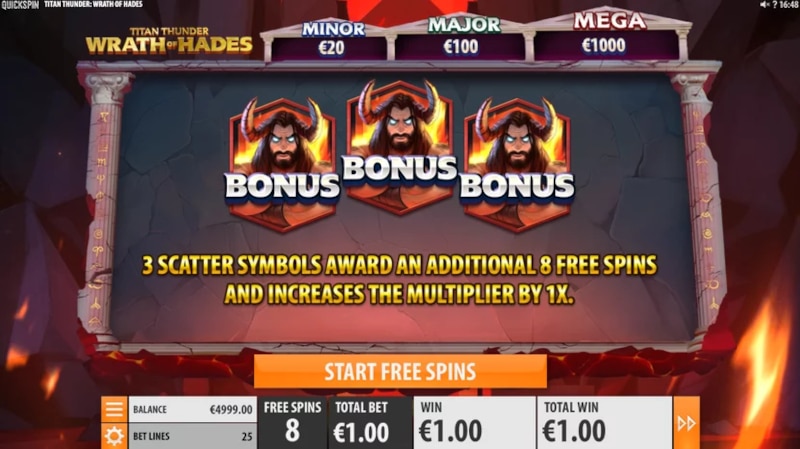 Find three Scatters in the first, third and fifth reel to activate eight free spins. Finding three additional Scatters during the special feature will award eight additional free turns. Furthermore, each retrigger also increases the multiplier by one! It is possible to trigger the previous bonus while this one is active. Another way to activate the free spins round is to buy it directly. This will cost you 40x your total bet.

This five-reel, 25 payline release by Quickspin has the maximum prize worth 15,098x your total stake. As you would expect, a jackpot that lucrative demands equally high volatility to boot. The high volatility is not everyone’s cup of tea, but if you enjoy that type of slot you will fall in love. Especially as it offers an above-average RTP of 96.25%.

Titan Thunder Wrath of Hades is an excellent game that we had to highlight. The special features are easy to wrap your head around but can produce very exciting results. Do not expect it to be easy to get the biggest possible prize. However, you can still win an impressive amount and have a blast doing so. We at Indian Casino Club wholeheartedly recommend this release!