One or two software providers have predominantly represented the live casino space. There is no denying that Evolution Gaming and Playtech have the biggest diversity of games on the market. That said, other developers are also making their mark in the industry. One of those up and coming names is Ezugi!

While they never reached the same level as other competitors, the developer has a loyal following. The software provider has a string of familiar games, as well as some exciting variants! They were also willing to recreate popular casino games like Keno in a live dealer setting. Now, the developer is offering a new set of releases, from their latest Indian themed studio!

The studio launch comes with the release of Lucky 7. However, that is far from the only game that will be hosted there. Titles like Namaste Roulette, Andar Bahar and Bet on Teen Patti will also find their home in the India themed studio! That means casino releases popular in India will also come with an appropriate theme!

We love this for two reasons. First, it shows the rising importance of India as a market. Ezugi is clearly relying on players from our country to be a sizeable audience in the future. Second, it introduces more people to Indian culture. Games can often be the first step to people becoming curious about other aspects of that country. With an appropriately themed studio, that connection will be even more obvious!

Alongside the launch of a new studio comes Lucky 7. It is a slightly modified version of the ‘hi low’ format. The title was designed primarily with an Indian audience in mind, but Ezugi expects it to do well in all markets. The goal of this release is to predict if the next card will be above, below, or equal to seven. It also comes with two side bets: whether the next card will be red or black and whether it will be odd or even. 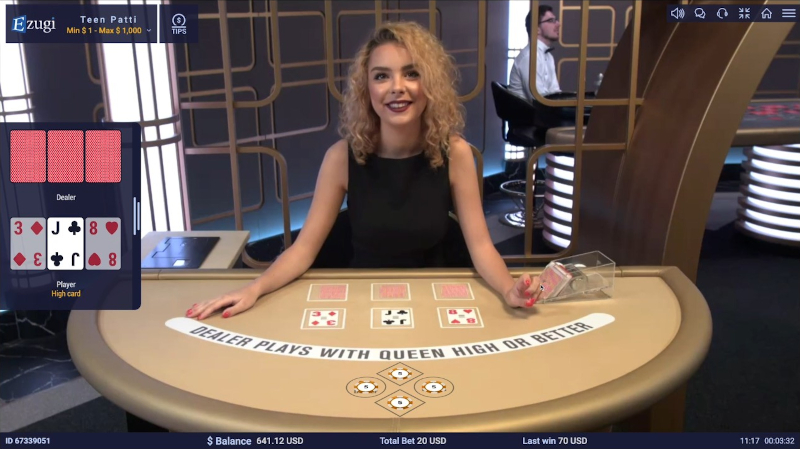 Correctly guessing that the card will be above or below seven pays a standard 1:1 prize. Meanwhile, predicting that the next card will be a seven and actually drawing it pays 11:1! Guessing the right colour pays 0.9:1. Guessing Odd right rewards you with a 0.8:1 payout, while Even pays 1:1

This is one of the few titles where the side bets have a better RTP than the main game. The main bet has a 92.3% RTP. The highest possible RTP is playing the Odd bet, which goes up to 96.92%. The RTP for Even is 92.31%, while Red/Black both have a 95% RTP. It certainly has the potential to create some huge wins. We at Indiancasinoclub.in will be keeping a close eye on Lucky 7 to see what happens.