Ever since baccarat blew up, operators and software providers have been trying to replicate its success. It delivers an addicting gameplay loop that is very simple to jump in and play. On top of that, the low house edge makes it an attractive choice for punters, drawing in many of them. Now, it is Ezugi’s turn to try this out. They turn to their studio in India for an answer, launching 32 Cards Live.

This is a new title developed specifically by Ezugi. The team behind it has devised something new in the iGaming space. Unique to this release is the fact it is played is a thirty-two card deck instead of the standard fifty-two. It is definitely one of the more interesting recently launched games. Join us for an in-depth look on how it is played, and what the best bet is.

As we mentioned, 32 Cards Live is played with thirty-two cards. These cards consist of all cards from six to kings, each one awarding different point values. The point value of each card is equal to its number. For example, the number six card will be worth six points. The remaining cards function the exact same way. J, Q, and K are worth eleven, twelve or thirteen points, respectively.

The goal of this game is to predict the strongest value hand among the four player hands on the table. Hands are labelled as player 8, player 9, player 10 and player 11. This is not arbitrary. Instead, these names are used to highlight the number of points each hand starts with. Player 8 will always start with eight points, while player 11 starts with eleven points. That means player eleven is more likely to win in the long term, which is reflected in the RTPs.

Naturally, Ezugi is well aware of this. This is why not all four options offer the same rewards. The less likely a hand is to win, the better its payout will be. Meanwhile, safer hands allow you to play more in a single round.

In order to win, the player’s hand and the drawn card are added together. If player nine draws a seven, the total value of his hand will be 9+7, which is 16. All four hands will then be compared, and the highest value hand will win the round.

Of course, this kind of system naturally lends itself for the creation of ties. For example, hands eight and ten both draw a score of twenty-one. In that case, the dealer will draw an additional card for the two affected hands. The hand that has the better score after second cards are drawn will be the winner of that round. 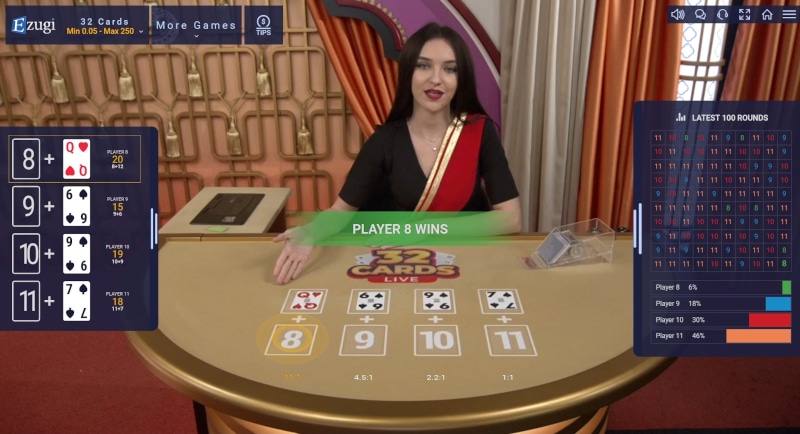 Keep in mind this only occurs if this is the strongest hand. Going back to our example, the tie round would be played if player 11 drew twenty-two or higher. In that case, player 11 would win, and the tie would not matter.

Return to player is a very important metric to look at when deciding what to play. As a general rule of thumb, the higher an RTP is, the better off you are playing that bet. In 32 Cards Live, Ezugi’s design predicts the following return to player for the four available bets.

When we saw these numbers, the team at Indian Casino Club was quite surprised. First, all of these RTPs are lower than expected. This is not a deal-breaker for us, but it makes it difficult for this release to compete. However, we were even more surprised to see the least likely bet have the highest RTP among the four.

How is that possible? It boils down to the way payouts are handled. With an 11:1 reward, player 8 overcomes its disadvantages over the other three. It does not win as frequently, but its payout makes it worth it. In fact, it even makes it a better bet compared to player 11, which will win much more frequently due to the math model.