What happens after the age of humanity ends? No one knows for sure, which leaves room for many creative interpretations. Some will opt for a more realistic approach, while others go for a silly but undeniably badass theme. The latter approach is what ELK Studios decided to go for when designing Nitropolis! Join us as we take a closer look at this interesting title and find out what makes it tick.

This is clearly not immediately post-apocalyptic. We see what looks like a large settlement, which focuses around large industrial chimneys instead of skyscrapers. It certainly makes for an impressive view, which is enhanced further with other small details. You will occasionally spot the birds flying around, and the sky changing as you activate special features.

The world of Nitropolis is one that is split between four animal-based gangs. You will work alongside Rogue Rats, Pug Thugs, Gritty Kitties and Dirty Dawgs. Their members and gang logos can be found on the playing field as paying symbols, alongside four playing card royals. A nuke explosion is a Wild, while an engine serves as a bonus icon.

The slot rewards each winning combination with a re-spin. Symbols that were part of a win will be spun again, giving you an opportunity to win again. Re-spins continue as long as new winning combinations can be formed. When no new wins can occur, the special feature ends.

Every reel can transform into a Nitro Reel, which covers two positions with multiple icons. This allows you to fit four, six, eight, ten or twelve symbols in a smaller position, increasing the number of ways to win. Nitro Reels can be upgraded during re-spins or between free spins. This upgrade is random, as there is no way to control it. Finally, Nitro Reels have a chance to re-spin if there is no win at the end of a spin. 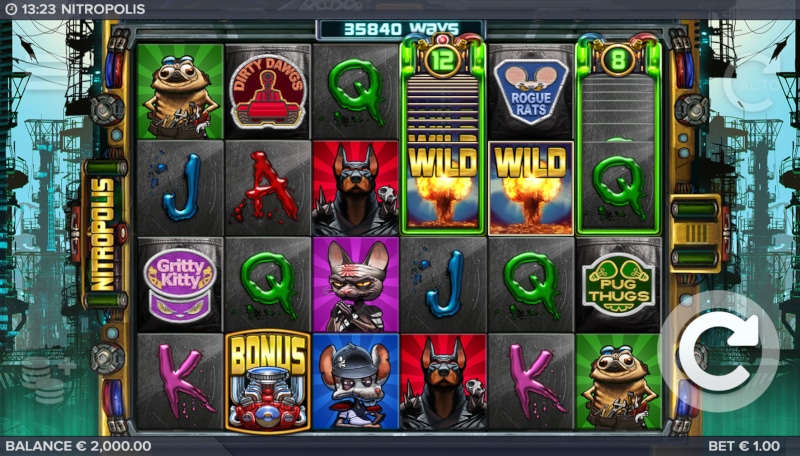 Land three, four, five or six bonus icons to win ten, fifteen, twenty or twenty-five free spins. It is possible to retrigger free spins and unlock additional turns during the bonus. You get the same number of additional free spins as you would when first triggering the special feature. During free spins, Nitro Reels are locked in place. On top of that, one symbols is chosen to become a Scatter, which can pay from any position.

This six-reel, 4096 ways to win release by ELK Studios promises a whopping 10,000x maximum prize. This comes at the cost of high volatility. If this is something you enjoy, then we are sure Nitropolis will be right up your alley. Especially since it comes with an above average RTP of 96.10%.

Unfortunately, we do not get many opportunities to highlight ELK Studios software here at Indian Casino Club. They tirelessly produce great games, but there always seems to be something better on the horizon. That said, we feel like they hit the jackpot with Nitropolis. You should definitely check this release out if you enjoy high volatility and post-apocalyptic punk themes.