Since time immemorial, humans sought the easy path to success. We’re naturally prone to finding the most efficient solution. And after seeing others hit ridiculous jackpots on a high profile slot tournament, you might want a shot! So you start investigating the wonderful world of slots. Sure, you could settle for the safer option of low variance games. But they’re not the ones that can offer that life-changing jackpot!

No, that honour belongs to high volatility slots! These games are defined by being difficult to beat. Software providers invite you with the promise of winning thousands more than you initially wagered. The chances of scoring such an amazing prize, however, are very low. If you want to beat the odds, you’ll have to be determined and play the right release. And that’s exactly what our list will help you choose!

Dead or Alive is a familiar name to any seasoned player. It has a cool cowboy theme and is made by the talented team at NetEnt. It took a while, but the developers finally came out with a sequel to this eternal classic! They promised an upgraded version, and delivered spectacularly!

The original free spins special feature which made the game popular was preserved. On top of that, two additional free spins rounds were added, giving punters options to choose! That’s one of the things Dead or Alive 2 is notable for. You can choose which free spin you want to play after triggering it! Many other releases would heavily benefit from that element of choice. Top tier work from NetEnt, as always.

Our next venture takes us from the old-timey wild-west to a neon-heavy futuristic Tokyo! In Wild Chase: Tokyo Go, a gorgeous sports car is racing down the road, while you drink in the beautiful skyline! It looks so pretty, you might forget this is actually a high stakes heist! With Quickspin and your partners in crime, you have to make your escape before it’s too late! 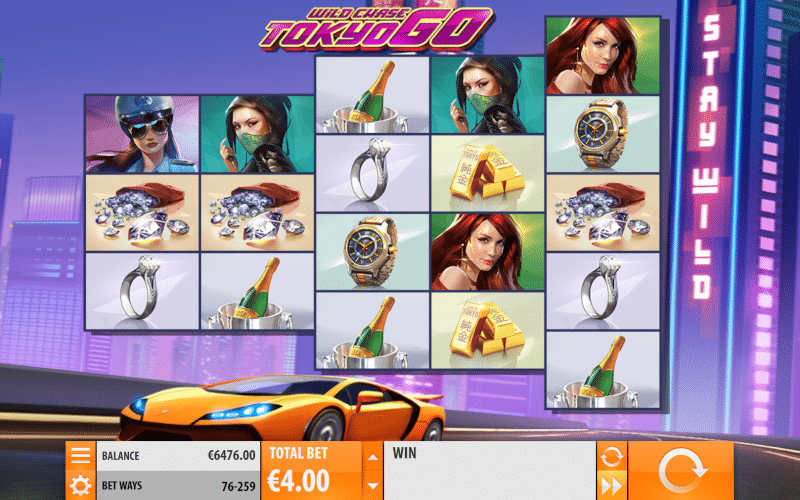 Check out our selection of online slots with high volatility.

Have no fear. There’s more to this slot than just pretty visuals and high volatility. It offers a unique reel setup: 3-3-4-4-5. Each win activates a re-spin, which then expands the playing field. It can grow to its full size, which is a large 5×5 board! The winning combination in the re-spin shuffles one position to the left with each re-spin. Once the board is fully expanded on the fourth re-spin, the winning icons become sticky.

This particular game is a real Indian Casino Club favourite! Playtech are well known for their amazing progressive jackpot games. But Buffalo Blitz doesn’t have that. Despite a simple special feature, it’s earned its place on this list because of the amazing winning potential it offers. Each spin has a chance of awarding 10,000x your total bet back as a cash prize!

As for its special features, you’ll find them quite familiar. Wilds can appear on every reel except the first. During free spins, they can appear with a 2x, 3x or 5x multiplier attached. Meanwhile, three, four, five or six Scatters on the board will grant eight, fifteen, twenty-five or one hundred free spins, respectively. There’s no limit on how many times you can retrigger free spins either, which can create massive wins!

When you play the Game of Thrones slot, you either win the top prize or lose your budget trying. The world-famous TV show has led to an amazing, high volatility release! The game is made by Microgaming and has two versions. One with 243 ways, and the other with 15 paylines. We stress that you pick the 243 ways to win version. It has a better RTP, and by extent, better odds of scoring the maximum prize!

Symbols have a chance of appearing stacked, both during normal gameplay and free spins. Two Scatters in any position award a random cash prize. Meanwhile, three or more Scatters let you choose between four free spin special features. You can choose a better multiplier with less free spins, or a weaker multiplier with more free spins.

Your choice also impacts how many house shields will appear stacked. It doesn’t seem like a big deal at first, but it does increase your chances of winning.