Which Team to Select in Gordon Ramsay Hell’s Kitchen: Blue or Red?

Gordon Ramsey has built a career on his firebrand personality and creative insults. The chef took the cooking world by storm, taking part in multiple interesting shows. The latest of which is Gordon Ramsay’s Hell’s Kitchen. A game show where two teams of chefs have a cook off and try to impress Ramsey. If they succeed, they stay in the competition.

NetEnt clearly took inspiration from the show when designing this slot. Both its special features and visual design are very reminiscent of the red versus blue dynamic present in Hell’s Kitchen. Which side will you back in the battle for the cooking throne?

If you are a fan of the show, then the visuals in this release will be right up your alley. The background image captures the red-blue dynamic quite easily thanks to the reel design. Outside of that, the majority of the graphics are comprised of the incredible symbol designs.

Icons are split between stylised playing card royals and food that looks too delicious to be eaten. Crazy, we know. That said, one look at these and you will know exactly what we mean. Special features also have some excellent symbol designs, but we will not spoil the fun of it for you. Some things are best left discovered personally!

Every spin, there is a chance for the Ramsay’s Wilds bonus to trigger. When active, the special feature will add between five to seven Wilds in random positions on the board. The added Wilds can substitute for all icons except for Scatters.

Scatters can appear on the first, second, fourth and fifth reel during normal gameplay. Find three or four at once to win ten or fifteen free spins, respectively. Before free spins begin, players will be asked to pick the red or blue team. After making your choice, the bonus round begins.

The board splits into two play areas: one red and one blue. You receive wins from both sides. Up to three Order Up bonuses can appear in a single spin. These include a 2x multiplier, 3x multiplier or the Team Wilds bonus. Team Wilds grants between three and eight Wilds when it triggers.

Order Up special features are colour coded. When they land on the board, they only apply their effect for their respective play area. If the 2x and 3x multiplier of the same colour activate simultaneously, players receive a 5x multiplier for that round.

The team whose side wins more money is the winner of the challenge. If you predicted it correctly, you get access to Gordon’s Bonus Game. This is a pick-and-click special feature where you can draw cash prizes. Players can reveal 2x, 3x and 5x rewards, as well as a 2x and 3x multiplier. The round continues until players find three X symbols.

You play this game on a five-reel, three-row board. It has twenty fixed paylines, meaning they cannot be toggled off to decrease your total bet any further. To win, land three or more matching icons next to one another, starting with the leftmost reel. All winning combinations must follow an active payline. If these conditions are not met, the relevant cash prize will not be paid. 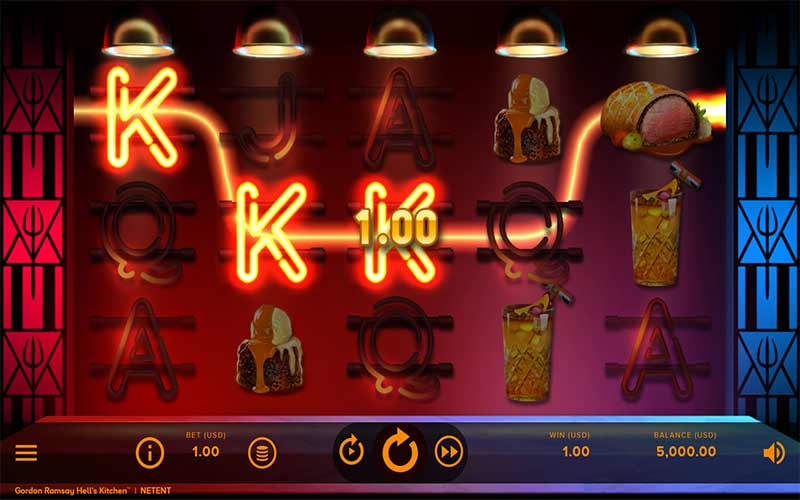 Unlike many of their recent releases, Gordon Ramsay Hell’s Kitchen is a low volatility title. The slot is clearly designed to appeal to as many people as possible. Making this title casual friendly was probably for the best, given how wisely known Gordon Ramsay is. Despite this, players can still sneak a 1000x jackpot occasionally from this game. It offers an above average RTP of 96.07%.

We had high expectations from this release. As such, we are happy to report NetEnt delivered on all of them! The graphics are fantastic, and are sure to charm both new and existing players. The low volatility and 1000x top prize will probably drive off any high rollers among us. That said, the team at indiancasinoclub.in can recommend Gordon Ramsay Hell’s Kitchen to everyone else! The low variance makes the numerous special features hit quite often. A fun experience you should definitely check out!