Online casino games come in many shapes and sizes. Developers are constantly creating new releases, and finding something to play can be overwhelming. We occasionally highlight a few of the more interesting titles that we have come across recently for that reason. Join us for an in-depth look into some of the latest and greatest title to come out of Play’n GO.

This slot first caught our eye thanks to its rather simple set of special features. Many titles opt to add a huge list of bonuses in an effort to attract as wide of an audience as possible. In contrast, Rise of Athena is a more focused experience, and that is part of its appeal. Of course, it helps that those special features are fun to play around with. We have multiplier Wilds on offer, which are enhanced further thanks to the free spins round!

This game has high volatility and a top prize of 5000x your total stake. This is all rather standard for Play’n GO. If you enjoyed any of their recent titles, you will probably enjoy this slot, too! The awesome top prize, combined with a thrilling free spins round during which you have sticky multiplier Wilds? The Indian Casino Club team will not forget this experience anytime soon.

We do not have many opportunities to cover bingo games. It is not for a lack of interest on our end. Instead, most bingo rooms tend to be something we have already seen thousands of times before. However, Viking Runecraft Bingo is not happy keeping to the status quo.

For starters, the game gives you an option to play up to four tickets at the same time! You can reshuffle your cards at no extra costs before committing to a spin. If you are inches away from forming a winning combination, you can buy up to thirteen extra bingo balls. The cost of buying extra balls goes up as the potential win size increases.

Gift of the Gods can also trigger randomly on the first, second or third ball. It awards an extra ball free of charge, decreasing the costs of chasing wins using this method. Draw a perimeter pattern on one of the cards to win one of four different bonuses. Finally, there is the Ragnarok bonus, unlocked by achieving bingo in the first thirty balls.

Asian themed slots have been increasingly popular in the last couple of years. However, they always felt a touch too generic for our liking. Play’n GO seems to share that sentiment, as they have recently launched Madame Ink. This tattoo themed game takes place in one of the shadier parts of Asia, and the background image exudes atmosphere! 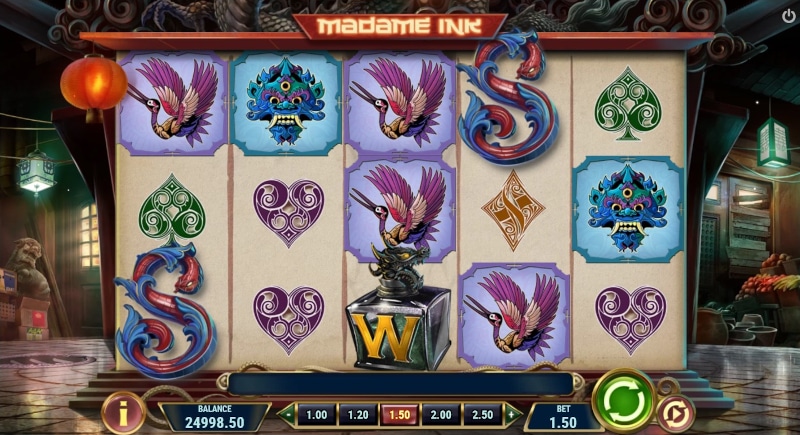 Play’n GO has been quite busy of late. Check out their top games.

That said, there is more to our enjoyment of this title than just good visuals. There are mystery reels, expanding Wilds and three different types of free spins. Players can choose themselves what kind of free spins bonus they want to play, which is a huge plus in our eyes. This is a medium-high volatility release, which can produce wins up to 5000x your total stake.

Discos have left an undeniable mark on people. Similar to neon lights and other hallmarks of the American 1980s, they remain a frequent inspiration for new things. In Disco Diamonds, we are taken to one of those colourful nightclubs from decades past to enjoy ourselves. The action takes place on a five-reel board with 243 ways to win.

What about bonuses? Three or more Scatters activates a bonus wheel, which can grant free spins or an immediate cash prize. There are also Disco Re-spins, and a free spins round, both of which can produce some lucrative results. The top prize you can win here is a whopping 10,000x jackpot.

Christmas is a wonderful time of year, but not everyone knows how to appreciate it. That was the story of Ebenezer Scrooge, who had to learn the joys of this holiday through supernatural means. These ghosts make an appearance here, enhancing this game’s multipliers using win spins! There are also randomly awarded multipliers and multiplier boosts. This is a medium variance release with an above-average RTP, and a top prize worth 1600x your total stake.