One of the best things about online casinos is the steady stream of new slots they offer. Every month, we have a whole heap of new games to enjoy from several software providers! Play’n GO obviously wants to get in on the action themselves, as they plan to launch three new games. In this article, we will check out all three releases. Will Play’n GO knock it out of the park three times in a row?

No, this is not a slot based around an eco-friendly Batman. Instead, it follows a quite literal green knight as he defends his forest home from conquerors and magicians. To accomplish this, the knight defends himself with runes, shields and his mighty steed! The visuals are top notch, as we have come to expect from Play’n GO. We particularly like the knight’s design. You can see how nature has overtaken his armour.

Players can play with a variety of fun special features. Shield Wilds can appear multiplier Wilds, which can boost wins up to 100x. Multiplier Wilds can appear during free spins, as well. The game is played on a five-reel, three-row board with twenty paylines. Despite that simplicity, you can win up to 10,000x in this highly volatile release! Simple and engaging; Green Knight is definitely worth checking out.

Listen to The Crypt in House of Doom follow-up

Sequels always draw a fair amount of attention. To our knowledge though, this is the first slot sequel that uses a music theme. Sticking to the dark theme, Play’n GO has partnered with emerging rock band The Crypt for the soundtrack. We have to admit, the music sounds good. Of course, whether it will still sound as good after a couple of thousand spins remains to be seen.

Visually, House of Doom 2: The Crypt sticks to the same visual style as the original. All the action takes place on a five-reel, three-row board with twenty fixed paylines. The game has a high volatility, and comes with a top prize worth 6000x your total stake. Players can achieve this win thanks to the abundance of special features!

If you found The Green Knight too light on features, this game will more than make up for it. Spirit gates can expand Wilds to fill the entire reel and unlock re-spins. You also have three different Wilds in this release, each one with their own effect. There is also a special fourth Wilds that combines all the previous three! Finally, we have the free spins bonus that can be upgraded into crypt spins using spirit gates.

At first glance, you might think you are in for a relaxing experience with Shimmering Woods. However, you would be very wrong to think that. Among the relaxing forest scenery, players will see plenty of gems lurking about. These precious stones do more than just look pretty. They offer a path to big wins that charmed many of us in the indiancasinoclub.in team. 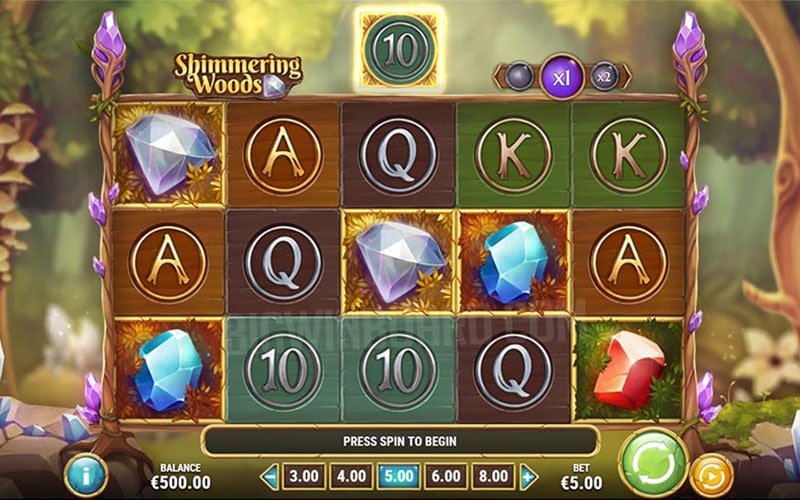 Everything seems normal at first, with a five-reel, three-row board with 243 ways to win. However, the playing field can quickly grow larger and reach up to 7776 ways to win! Once again, we are treated to a high variance Play’n GO title. However, it makes the grind worth it with numerous bonuses and a 25,000x jackpot! Talk about saving the best for last.

Bonus lovers will have plenty to look forward to here. To start with, players have access to cascading reels with an attached progressive win multiplier. Every spin can also benefit from Splitting Symbols that allows for increased paylines present in this Play’n GO release. That still was not enough for the developer though. That is why they added free spins with guaranteed splitting icons.

We expected high-quality slots from Play’n GO, and that is exactly what we received. The developer has adapted well to the demanding market, pumping out multiple fantastic titles every month. All three games we played felt like a remix of something we played before. They are enjoyable and lucrative, but none of them offer any new ideas. Even so, we recommend all three if you love high variance games.