If you enjoy stacks of cash and big jewels, you will probably love Play’n GO’s latest creation. Centred on wealth and all the fancy things it brings, Blinged expands the massive list of slots made by this developer. It borrows quite a few things from its cousin Pimped, which launched back in 2015.

Join us as we take an in-depth look at the newest offering made by one of our favourite developers. Get your fly shoes and your fanciest jewellery. We are taking a drive through New York City, and we are going to flaunt our wealth! With a little bit of luck, however, this game will give you the funds you need to get Blinged yourself!

This release is played on a five-reel board, where each reel is three symbols tall. There are ten paylines, which you cannot turn on or off manually. Wins are formed by finding at least three matching icons in adjacent positions, starting with the leftmost reel. All winning combinations have to follow an active payline to grant a cash prize.

Play’n GO’s slot has an RTP of 96.25%, which is slightly above average. It is a medium volatility game, and the maximum prize you can win is worth 5000x your total stake. You can wager between ₹10 and ₹10,000 on any spin. Keep in mind that exact numbers might be different depending on your chosen casino.

From the moment you first launch this release, you can tell a lot of effort was put into it. The animation that plays upon first booting Blinged looks gorgeous. It will be just the first of many fantastic animations that we get to enjoy while playing. While they are not quite yet on the same level as NetEnt, they have been steadily improving over the years.

Of course, there is more to this slot than interesting animations. Choosing a fancy street reminiscent of New York certainly sells the feeling of street luxury. Symbol designs also play a major part! Lower value icons are playing card royals decked out in diamonds. High-value symbols include stacks of cash, black and gold sneakers, a fancy golden ring, and several hot girls.

Scatters can only appear on reels one, three and five. Scatters are represented by these massive diamonds that are probably worth more than our house. Land three at once to unlock five winning spins. Each winning spin will continue to re-spin until a winning combination is created. 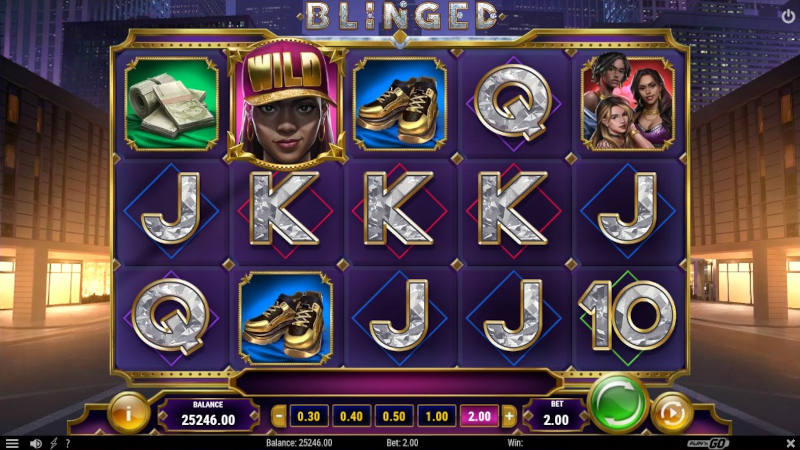 Check out our review of Blinged slot, developed by Play’n GO.

Each time a re-spin occurs, it increases the win multiplier by one. The multiplier does not reset between Win Spins, either! Each time a Scatter lands during Win Spins, it grants one more Win Spin. Up to twenty Win Spins can be played from a single special feature activation.

If you only get two Scatters instead of three, you receive one Win Spin. Despite being a one-off, it functions in the exact same way. That gives it awesome winning potential, especially if you land a lucrative combination with a big multiplier!

Not everyone will enjoy this title. Some players will be turned off by the theme, while others will hunt for a higher volatility option. Certainly, when you compare it to its predecessor, it can seem like a slight downgrade. It offers a smaller maximum payout, no gamble bonus and the paylines are no longer flexible.

However, Blinged does not try to copy Pimped mindlessly. While they are similar, Play’n GO has made quite a few changes to help their newer release stand on its own two feet. It is meant to be a more forgiving experience, but one that can still pack a strong jackpot with its 5000x maximum win. If that sounds appealing, then the Indian Casino Club team wholeheartedly recommends this slot!