Few games can keep our attention fully as poker can. We enjoy playing casual titles like roulette while something is playing on TV. However, the same is never true for poker! We immerse ourselves in the role, trying to silently bait out the enemy with a masterful bluff. At other times, we were the ones trying to figure out if our opponent was bluffing. Maybe they really had a hand that could beat our four-of-a-kind. You never know!

Now take all of the thrills of a regular poker game, and add the promise of an awesome prize if you win. The online poker tournament is born! The idea is popular enough that you may occasionally catch star players competing on TV. Sadly, our attempts at fortune won’t be televised, but we can still have our fun. If you think you have what it takes, our article will guide you to become an online poker tournament pro!

Before you join a tournament, you will see all the details listed. How much you have to pay for Ante, the buy-in cost, the format and the time limit, all neatly displayed. Buy-in costs tend to vary. We have seen tournaments with free buy-in, but they usually make their money by allowing you to buy more chips during the tournament. Others have a set starting price, and won’t allow you to buy more chips.

Once the setup is complete, you’re given a stack of chips to play. And while the gameplay remains the same, the goal isn’t to accumulate wins. Instead, your goal is to gather up as many points as possible during each level. The best players then advance to the next level, where costs ramp up! The tournament eventually ends, and players will be rewarded following the set payment structure you saw at the beginning.

Every online casino tends to handle its tournaments a little differently. Some may value a professional set-up where everyone has an even playing field. Others may allow you to buy more chips to keep yourself going for longer. These rules are determined by the poker tournament format, which will usually be indicated before you join.

The most common of all tournaments is Sit n Go. There’s no set time on when this kind of tournament starts. You take a spot and wait for enough players to be present to start. Usually, between nine or ten players will participate in a single tournament. 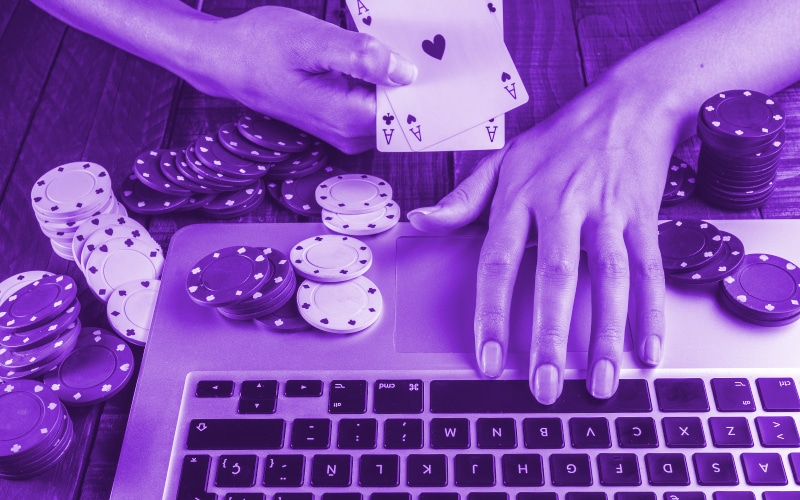 We take a look at various types of poker tournaments, including Sit n Go’s, Double Up, Bounty and more.

You can also enjoy Double or Nothing, which works similarly to Sit n Go. The two vary in how payouts are setup. Double or Nothing is played with ten players. The top five punters receive double their buy-in, while the last five receive nothing. Yes, that means that first place and fifth place receive the same prize, which makes it less competitive than a standard Sit n Go.

If you have a bit of cash to blow, you can also participate in re-buy tournaments. You cannot buy extra chips whenever you like, however. To keep things relatively fair, casinos will limit re-buys to the first few levels and will restrict how many times you can re-buy your way back into the competition.

Our personal favourite are Bounty tournaments. Here, the goal isn’t to win; it’s to make sure the other guy loses. Everyone on the table is given a target, and they win if they knock that player out of the tournament. You’re then given a new target… while also becoming a target to more and more punters as you rise to the top.

Naturally, it begs the question; what tournaments to play? That’s determined by your skill level and budget. Punters who are still mastering their poker strategy should stick to smaller tournaments. Re-buys are good if you can afford to buy yourself a second chance now and then. Alternatively, Double or Nothing puts you under a bit of pressure while still giving you a chance to win if you end up in the top five.

If you just want to play for fun, we at Indiancasinoclub.in definitely recommend Bounty tournaments. Especially if you’re playing with a friend, and they end up being your target!

High stakes players should target standard Sit n Go tournaments with high limits. They don’t have any exotic rules, but can offer amazing prizes! Perfect for people who want to bet big and win bigger.