Are you tired of the same old slots you are used to playing? If so, you may be interested in knowing that Microgaming and their partners have prepared an action-heavy July for us! The developer was hard at work creating brand new games that will keep you invested and interested. Join us as we take a closer look at these upcoming games, and see what the software provider has in store!

The 1980’s remain a popular thematic pick for many developers, Microgaming included! It was an incredibly colourful era, whose iconic look still captures our imaginations to this day. This slot uses that to its advantage to make a fantastic release. We really like how the theme was approached. Colours constantly swap back and forth, giving the background a slightly different appearance each time.

On top of pretty graphics, we also have some cool special features to work with. Sticky Wilds and multipliers are the ones you will see most often. Sticky Wilds also activate re-spins, where sticky Wilds are held in place until no new sticky Wilds land. Finally, we have the Glow bonus. In it, a single free spin is played with increased chances of stacked Wilds covering all five available reels!

Another fantastic slot to look forward to is Mayan Eagle! This game is a collaboration between Microgaming and All41Studios. If you are looking for gorgeous visuals, this release certainly fits the bill! It allows us to view this sprawling Mayan temple from a distance. We can see the pyramid at the top, and the stairway leading to a massive gate. We also see a huge artificial waterfall, which has a beautiful and fluid animation.

However, we do not want you to think this is all about graphics. The slot uses a large 6×5 reel with 15625 ways to win to grant prizes. Furthermore, the game uses the cascading reels system, allowing punters to win several times in a single spin. Other fun bonuses include Mystery symbols and a free spins round. During free spins, punters benefit from a progressive win multiplier!

Every four years, the world comes together in anticipation of the Olympics. This event has its roots among the ancient Greek kingdoms. This Microgaming slot brings this ancient era to life in a magnificent manner. We can see a huge stadium packed with excited crowds cheering their favourite athletes on. The winner will be allowed to take home a massive prize, and we are not talking about the in-game winner! 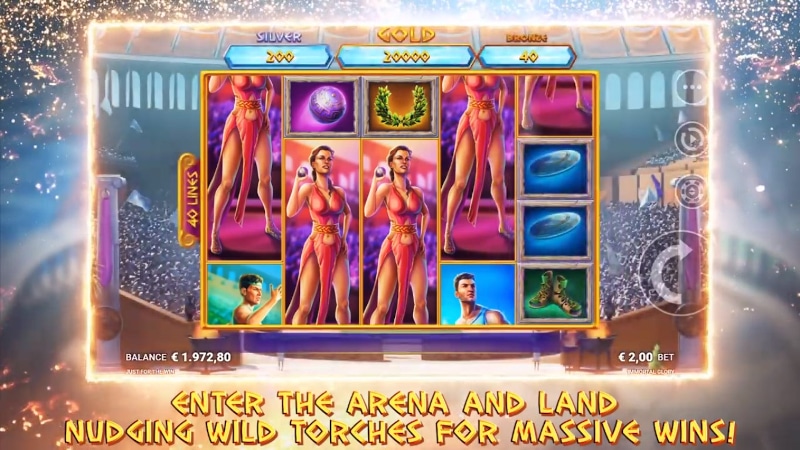 Check out the new batch of slot games developed by Microgaming and its partner studios.

There is a fantastic 10,000x fixed jackpot waiting for the luckiest person to score it. To do so, you need to land the Jackpot symbols on reels one, three and five. Then, pick one of the covered statues to reveal the prize hidden beneath. There are three jackpots present: a bronze, silver or gold each worth 20x, 100x and 10,000x, respectively. Alongside the possibility of winning a jackpot, Microgaming has prepared free spins with nudging Wild stacks. Incredibly fun and super rewarding!

Get ready for a fiery experience that blends the old in with the new! This release borrows some design choices from classic slots and applies them to more modern gameplay. The end result is fantastic! Hellish flames are visible all the time. The background itself is not very impressive by itself. Only when it is combined with beautiful animations does its full potential come forward!

Do not relax and think this is a simple slot to play. Diamond Inferno is played on a 5×3 reel, which can expand to a 5×6 size. The first win unlocks one extra row and awards a re-spin. Each subsequent re-spin win unlocks another row until the maximum size is reached! After unlocking the full grid, each consecutive win increases the multiplier! It reaches 2x, 3x, 5x and finally 10x as the maximum multiplier value. Diamonds are also incredibly valuable, as they can grant big cash prizes the further up the reels they land!

These are just some slots we at Indian Casino Club decided to highlight. Microgaming plans to add even more releases for you to enjoy! Look forward to Banana Drop, Monster Blast, Queen of Embers and many other incredible games that will be dropping in July.With such a wealth of new games, being bored this summer will be impossible!