Meet the Gods in the Latest Betsoft Take Olympus Slot

Greek mythology has served as the backbone of many fantastic slots over the years. No doubt something Betsoft hopes to capitalise on with their latest launch! Take Olympus slot sets us atop the vast mountain, where we get to interact with the deities. Meet these legendary names, and the powerful effects they bring! The title blurs the line between normal gameplay and special feature, creating a unique experience along the way.

One of the most interesting things about this game are the different backgrounds. There are five deities, and each god has its own background image. This goes a long way to add to the visual diversity of Take Olympus slot. Players also benefit from cool animations, though those are sadly a rare sight. They are kept for special occasions, such as scene transitions.

Symbol designs also heavily lean into the ancient Greek god fantasy. Icons will either depict the deities or items that they are well known for. Symbols such as Zeus’ lightning bolt or Poseidon’s trident are lower-value icons. Meanwhile, the five gods are high-value symbols. Their payouts are better, but they cannot be won as easily. Unlike many other titles, Take Olympus does not have special icons.

Unlike most other slots, we do not get actively distinct special features here. Instead, we always have an active god present on the playing field. Every ten spins, a different deity becomes active. Only one god can be active at the same time, and the same deity cannot repeat twice in a row. Apart from that, what god is currently active is decided randomly.

During Apollo spins, all Apollo or bow and arrow symbols are marked. Their positions will then remain marked for the following ten spins. On round ten of the Apollo cycle, all marked positions become Apollo Wilds. These Wilds can substitute for all icons except for Zeus.

In a similar fashion, Aphrodite and leaf symbols will be marked when Aphrodite is the active goddess. These positions will remain marked for the next ten spins. All marked positions on the playing field will turn into mystery boxes on the tenth spin of Aphrodite’s cycle. All mystery boxes will display the same icon, which can be any symbol except for Wilds. Positions between various mystery boxes will also be transformed.

Poseidon’s cycle has us chasing Poseidon or trident icons to increase a counter. Each relevant symbol increases the counter by one. On the final round of this bonus, Poseidon grants free re-spins. The number of re-spins is equal to the number on the counter.

Finally, we have Zeus. He can appear on all five reels and can substitute for all icons. He can also grant ten free spins to players! During free spins, Zeus can borrow the power of each deity for extra bonus effects. This can mean extra Wilds, synced reels, large multipliers, and random re-spins.

Betsoft’s release is played on a five-reel, four-row board. It has fifty fixed paylines, meaning we cannot turn them on or off when we want to. To win, you need three or more matching symbols in adjacent positions, starting with the leftmost reel. All wins must follow an active payline, or else the cash prize will not be granted. The top prize you can win is 2328x your total bet. 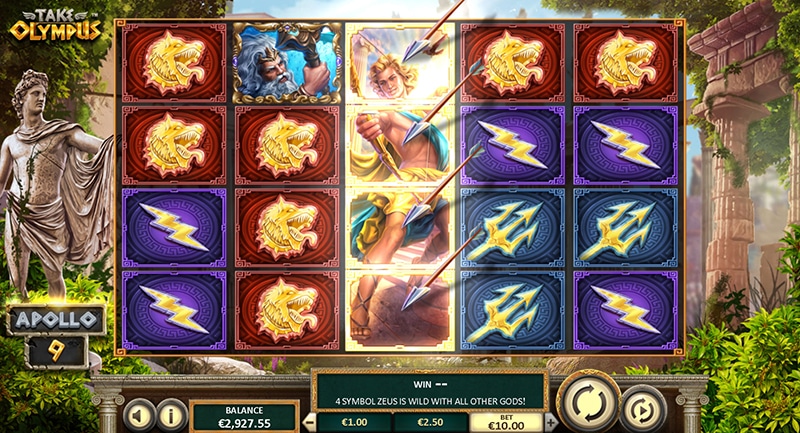 Low volatility and a high maximum payout are this game’s main features.

The top prize is even more impressive when paired with the low volatility Take Olympus offers. Do not expect that to mean it is easy to score big wins. Small prizes come by easily, but you will still have to work harder for larger prizes. The RTP for this slot is 95.49%. This is slightly below average when compared to other games.

An easy way to draw the attention of indiancasinoclub.in staff is to try something new with your release. Take Olympus achieved this with ease thanks to how its special features are structured. The only thing working against this title is the below-average RTP. The rest of the slot is fantastic and well worth your time.