Is VR Changing the Future of Online Gambling?

Technology waits for no one. Every so often, some new gadget comes along that fundamentally changes how we interact. The computer was one, and then it was the internet. The latest of these world-changing technologies came in the form of a smartphone! Since then, many of us have been on the lookout for the next big thing. A role that VR could very easily play!

As it currently stands, virtual reality headsets are becoming more commonplace. As the price tag slowly comes down and the experience improves, it will become even more mainstream! As VR becomes mainstream, many companies are starting to incorporate it. If there is one industry that could benefit from virtual reality, it is online gambling!

For as long as we can remember, online casinos were seen as not as good as the real thing. The criticism stood for a while, during the early days of online gambling. However, things were quick to change, especially after smartphones become a big deal! The powerful hardware of phones and a growing customer base allowed for more immersive experiences! Something pioneered by live casino games and their developers.

However, live dealers and impressive graphics cannot compete with virtual reality on that front. With a good headset and headphones, you will truly feel like you were transported somewhere else! If you have a wireless set, you can even more the mess of cables usually needed for VR to work.

Imagine a future where you can lean over a roulette table to see it spin. Seeing an online casino lobby full of actual players, who can chat between playing games. We are not there just yet, but things are moving in this direction. In a few years, virtual reality will be the best way to enjoy online casinos!

SlotsMillion’s Take on a VR Casino

You do not have to wait for a distant future to experience what VR has to offer. SlotsMillion has a VR casino that you can experience right now! You can experience the 3D through your own computer, or enjoy true VR with an Oculus headset. Set yourself up, activate the app and you are ready to go! 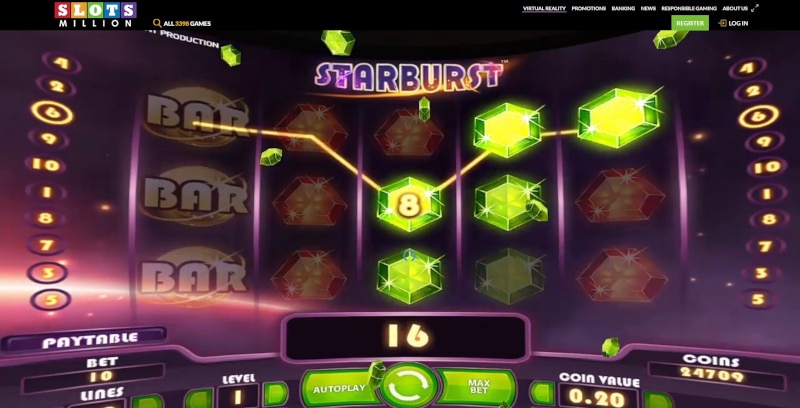 How will VR technology affect the online gaming industry?

When you load in, you will step through some doors and enter a large area. The space is set on the 80th floor of a skyscraper, where you can look outside and see a gorgeous view! As you walk around, you will see several distinct locations. A bar, the lounge and game space. When you want to play, you stroll over to the big screen!

Players have access to an iPad that sits in front of the big screen. You use it to select a game you want to play, and then it appears on the big screen! Some titles, like Starburst, have special 3D animations that immerse you even further! The thing we like best is the ability to play in this VR space with others by inviting them.

Is VR Ready to Go?

If you already have a VR set right now, we definitely think you should try it out. Operators have taken some major steps in making it increasingly viable. We imagine many bigger websites will incorporate their own VR lounge at some point. Most likely, as the cost of virtual reality keeps decreasing and the install base keeps growing.

That said, we do not recommend getting VR just for online gambling. It still exists in a prototype stage, and it will take a bit more time before its full potential is reached. However, you have a wealth of other virtual reality experiences to enjoy with one. We at Indian Casino Club definitely recommend looking into getting one. If not right now, maybe in a few years’ time.