Slot fans from across the globe know NetEnt is no stranger to trying new things. After all, plenty of new ideas ended up transforming into things we take for granted nowadays. Moving up from three reels to five is one. Having ways to win instead of fixed paylines is another! Wide varieties of special features were also added over the years, making slots the most diverse titles when it comes to gameplay.

For this particular release, the developers decided to poke around with the reels again. Unlike Finn and the Swirly Spin, they were not removed outright. Instead, NetEnt lives up to the InfiniReels name. With each win, the playing field grows larger, as do the prizes and available paylines! If this sounds fun, then the latest venture by this software provider is absolutely a must-play!

Each round starts with a small 3×3 board. You spin the reels as usual, up until a winning combination is formed. At that point, a new reel is added on the right side of the existing playing field. If that reel contains another winning icon, yet another reel is added! This continues until no new symbols appear that can contribute to the winning combination. Wins are reviewed and awarded, and then the next round begins.

When a new round starts, you return to the standard 3×3 board with 27 active ways to win. The expanded playing field cannot be transferred from one round to another. That makes it difficult to get a win, but it makes it relatively easy to expand it afterwards. Symbol value is predetermined up to five icons. After that, the value is always double of the previous one, scaling up infinitely! A quick way to turn your game into an Indiancasinoclub.in favourite!

Special features in Gods of Gold are built around this new concept. Two of them are generic. As such, it would not surprise us to see them become a permanent addition to the InfiniReels idea. When the reels stop and no more wins are present, the game can randomly choose to award a re-spin. Alternatively, a Multi-Slam can occur after a win, adding two or three reels at the same time. Multi-Slam is always a guaranteed win. 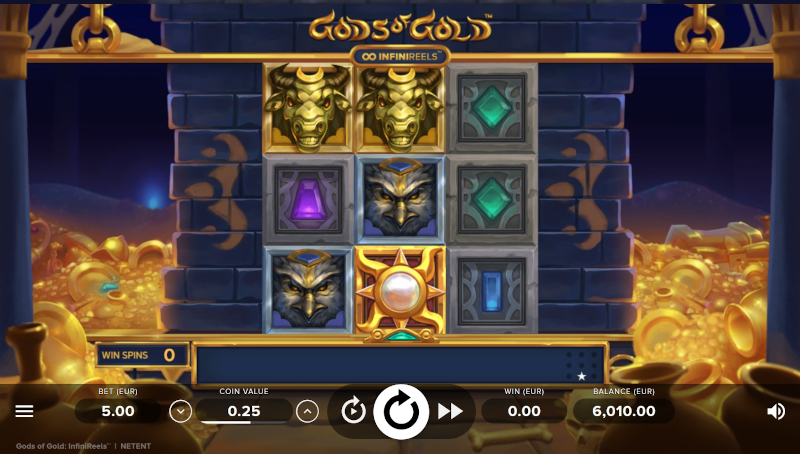 More game-specific bonuses include free spins and Wilds. For free spins, you need at least three Scatters to get ten extra turns. Each additional Scatter on top of that gets you five more free spins. Each free spin offers you a guaranteed win. However, the new slot engine makes it difficult to activate the special feature! You can only have one Scatter per reel. If you want to trigger the bonus, you had better hope the wins keep coming in!

Wilds work in the same way they always have. They can substitute for another symbol to become part of a winning combination. They cannot replace Scatters when it comes to triggering free spins, however! Unique to InfiniReels is the fact Wilds can only appear from reel four onwards.

Despite being the first to come up with the idea, NetEnt were not the first one to make a game out of it. That honour fell to Reel Play, a developer that is not nearly as notable as NetEnt is. The two companies even came together to agree on an IP partnership for the infinite reels idea. This allows both of them to capitalise on this new system without getting in each other’s way.

Reel Play’s game is called El Dorado Infinity Reels and plays in much the same way. However, their version forgoes ways to win in favour of clusters. If you have five or more icons present starting with the leftmost reel, you will win the prize. Once again, you start with three reels, and the playing field expands to the right. However, it only expands rightward if it will improve the winning combination.