Home » Casino news » Did You Know There Are Different Types of Card Decks?

Did You Know There Are Different Types of Card Decks?

Where did the first set of playing cards come from? No one is 100% sure. We know their origin is somewhere in the east. They eventually spread into Europe through multiple methods. These first decks hit southern Europe first and eventually made their way further north. In doing so, they became a popular pastime among both peasantry and nobility. Many of our favourite casino games were born during this time.

Of course, the cards did not remain the same in design. As they moved further into Europe, their art style shifted. It reflected the locals who lived there and their preferences. In this article, we will track how these different card decks appeared across Europe. How did we eventually settle in on 52 cards and a design that is uniform worldwide?

The Arabs brought in the initial set of playing cards. Merchants encountered them when purchasing other goods, and brought them back as novelty. As such, the first card decks to appear in Europe were in Italy and Spain. These countries are closest to the Arab world, after all. It made sense for card decks to appear there first.

Because of that, their designs also drew initial inspiration from Arab cards. Eventually, “Moorish-styled” cards would fall out of style in favour of modern designs. Spanish card decks would settle on 50 cards. They had nine pip cards and three face cards. The deck has four suits: clubs (bastos), golds (oros), cups (copas) and swords (espadas).

Both decks are still used to this day to some extent. For example, Playtech’s live casino division plays Sette e Mezzo with an Italian deck. If you want to see how these different decks look, this is the best possible bet.

It did not take long for card games to spread into other countries, including Germany. German cards would prove instrumental towards the modern card designs we know right now. French suits would draw inspiration from German card decks, which spread rapidly thanks to the printing press. The lower cost of printed card decks allowed them to dominate across German-controlled central Europe.

German playing cards originally had 48 cards, and eventually slimmed down to 32 or 36 cards per pack. Their suits depicted acorns (eichel), leaves (gras), hearts (herz) and bells (schell or schelle). German cards originally had four court cards: the king, queen, and two jacks. The queen would end up being dropped in the early 16th century.

Interestingly enough, not all German-speaking areas would end up sticking to German playing cards. French-suited cards would end up becomes very popular in northwestern Germany and parts of Austria after the Thirty Years war. Today, Germany uses French suits with the Berlin pattern.

Finally, we get to the French deck of cards. Their decks did not stand out immediately. As we mentioned previously, French decks borrowed ideas for suit designs from German-suited cards. Hearts carried over unchanged, but the rest shifted to the designs we recognize today. Bells became tiles, acorns became clovers and leaves became pikes. French decks also included the Queen, instead of having three male face cards. 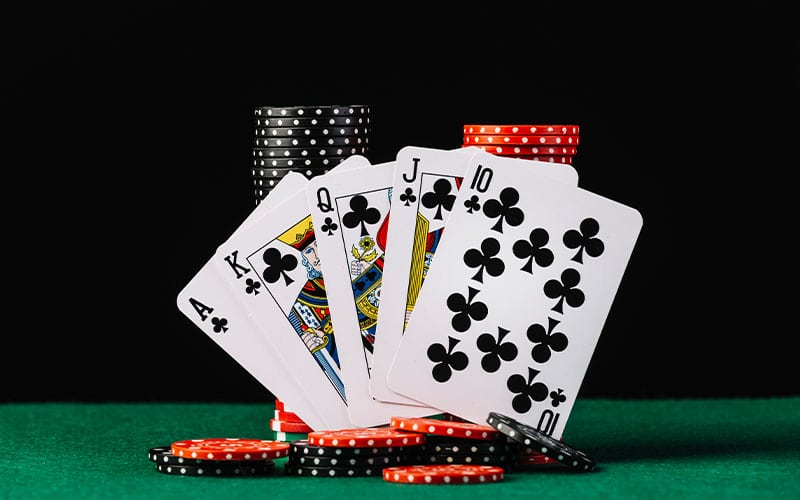 The French cards have been influenced by German cards but they also come with some unique design features.

French-suited cards also used popular characters from history and the Bible for its face cards. Their easy to use suits were easy to print, which spread the French design far and wide. The cards we play with today have their designs based on French-suited cards. The English spread their own version of French cards to the world. The cultural dominance of the United States afterwards cemented the English pattern as the International pattern we know today.

On one hand, it has helped standardize card sets. No matter if you play from India, China or Europe, everyone understands the cards instantly. On the other, it is a shame so many diverse sets of cards and card games have become irrelevant. The best solution may be Playtech’s approach. Exotic casino games are something Indian Casino Club will always support!