It can often feel like the world doesn’t actively think about India. Despite being a country with a rich history and culture, it’s often overlooked for other, more exotic choices. However, there is one thing we can count on promoting the wonders of India; video slots!

Software providers have been using our culture and mythology as the basis behind their games for ages. We don’t know about you, but we think this is amazing. It exposes more people to what India has to offer! Not to mention it brings much-needed diversity in a sea of releases based in ancient Egypt and China.

Today, we’ll take a look at the best India-Themed online slots you can play! So if you want to see how the rest of the world sees our country, these games will show you. And who knows? You might just get an awesome jackpot or two out of the whole thing.

Our personal favourite when it comes to how it depicts India is this Play’n Go release. It’s immediately obvious from the moment you first boot the slot! The graphics are breath taking. Soaring high above the mountains, with clouds passing you by. You can see multiple waterfalls in the distance. And to cap it all off, a huge Hindu temple!

Gameplay is okay, though not nearly as mouth-watering as the graphics. There’s a cascading reel bonus active, and a progressive multiplier that increases after each consecutive win. On top of that, you have a free spins round and a bonus game, both of which are incredibly fun! The only disappointment Pearls of India brings is its jackpot, worth only 250x your total stake.

You can’t have a list of best Indian-themed slots without NetEnt’s entry. Bollywood Story is themed after the TV dramas your family loves to watch. A young couple that wants to be together, in conflict with their disapproving families. The background image seems to be set in one of those amazing palaces you see on TV. Lavishly decorated walls and pillars give this game an aura of Indian luxury.

In terms of special features, we have the Floating Wild and a free spins round. Floating Wilds are active on every round. During normal gameplay, between two and four floating Wilds will appear. This is increased to between three and six during free spins! You can win a maximum of thirty free spins at once, with the ability to retrigger more. You can win up to 1000x your total bet. 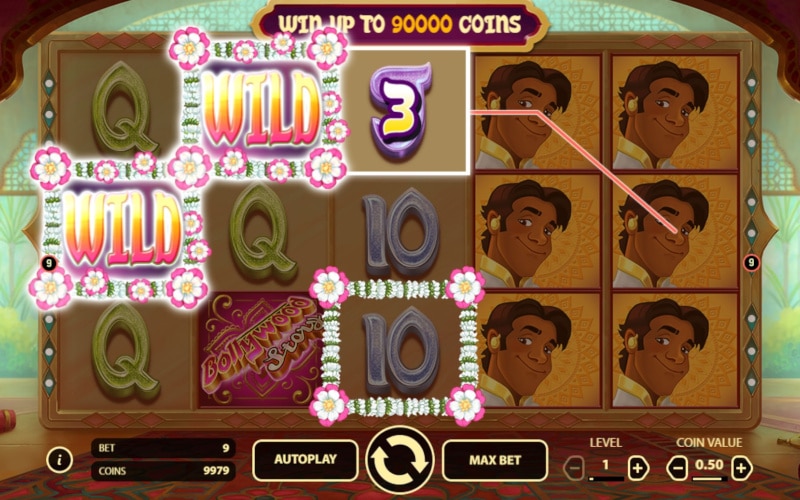 We are presenting the most interesting online slots featuring an India theme.

Few words based in Indian culture have managed to reach into the West as nirvana has. The concept is usually simplified down to inner peace there, and that’s the vibe we get from Yggdrasil’s entry. In terms of visuals, it doesn’t stand out that much. The reels have a slight darkening effect, preventing you from drinking in the amazing details in the background image.

This last game is only India related because it’s a Bengal tiger. It’s immediately familiar to any Indian, it’s our national animal, after all! Unfortunately, the species is endangered, which just means more effort has to be put into preserving it. It’s rather ironic that a released based on the tiger might suffer the same fate. It came out in 2012 and still runs using Adobe Flash. Come to the end of 2020, it may not be available to play.

And if there’s one thing we at Indian Casino Club can’t stand, it’s a dead slot. There is never a good reason to get rid of a release; only legal ones. We wholeheartedly recommend checking out Untamed Bengal Tiger. It offers a free spins bonus, lucky nudges and a collect-a-Wild bonus. All of these special features can earn you some amazing wins! If you can deal with the somewhat dated graphics.