Indiana Jones is a movie series that needs no introduction. The suave explorer has already inspired countless series, TV shows and games. 1×2 Gaming decided to take their own crack at Indy’s whip. Their version is undeniably cuter, as it swaps humans for cute kittens! However, this slot will be appealing even to people who are not cat fans. So hop aboard as we go to South America to uncover great treasures!

The visuals are done very well. The reels are left transparent, allowing us to soak up the beautiful atmosphere. We can see jungle sprawling in front of us as far as the eye can see. The only thing taller than the trees are literal mountains! Next to the reels, we see Whisker Jones hanging out. He is fully animated, and he will react as you land wins. The animations are fluid and easy to use, which we quite like.

Symbol designs are split into two categories. We have lower value playing card royals and higher value animal icons. The playing card royals consist of four letters: J, Q, K and A. The animals are made up of a single cobra and three cats in fancy suits. The Mayan pyramid is the Scatter, while a cat wearing a Mayan tribal headdress is the Wild. Whisker Jones setting his hat down is the bonus symbol.

What does the bonus icon actually do? Well, it transforms symbols into Wilds. Wilds can replace up to six icons in a single activation. The bonus symbol can only appear on the third reel. This limits how frequently you can trigger the special feature. 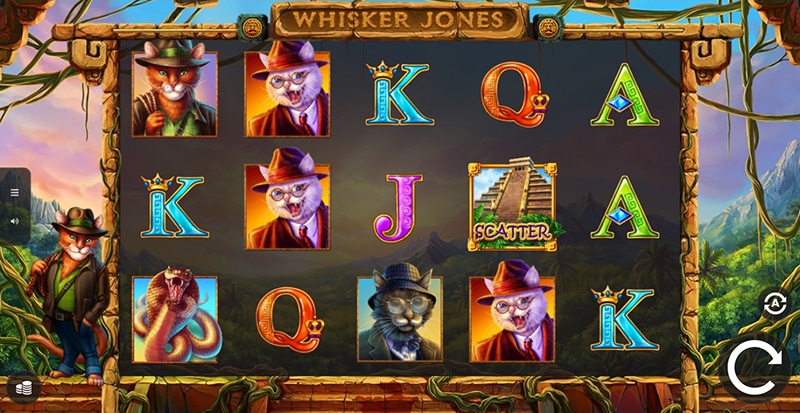 Read our review of Whisker Jones slot from 1×2 Gaming.

Landing three, four or five pyramid Scatters will grant eight, twelve or sixteen free spins, respectively. If you draw three, four or five Scatters during free spins, you will win four, six or eight extra turns. While the bonus is active, Wilds appear stacked on the playing field. It also changes the way the Wild transforming special features works. Now, the bonus icon is the one that transforms into a Wild. When triggered, the bonus will remove the least valuable playing card royal from the board. The more low-value symbols are removed from the board, the better your odds of winning big are!

1×2 Gaming’s release is played on a five-reel, three-row board. It has ten paylines, which cannot be turned on or off at will. Wins are granted by getting three or more matching icons next to one another, starting with the leftmost reel. The maximum prize you can win is 1500x your total stake.

The prize is good, but far from the largest one we have seen. The developers are aware of this. As such, they designed Whisker Jones to have a medium variance. It allows for fun gameplay balanced between frequent small wins and jackpot chasing. The RTP for this slot is 96%. This is average when compared to other titles.

One thing we noticed writing for Indian Casino Club is the increasing popularity of high volatility games. There is nothing wrong with that by itself. However, fans of more casual experiences can feel left behind. That is why we are happy the software provider put so much effort into this release. It has a charming theme, beautiful visuals and fun gameplay. The reward is good, with a medium variance to match. Definitely a game worth checking out if you are a fan of slots!